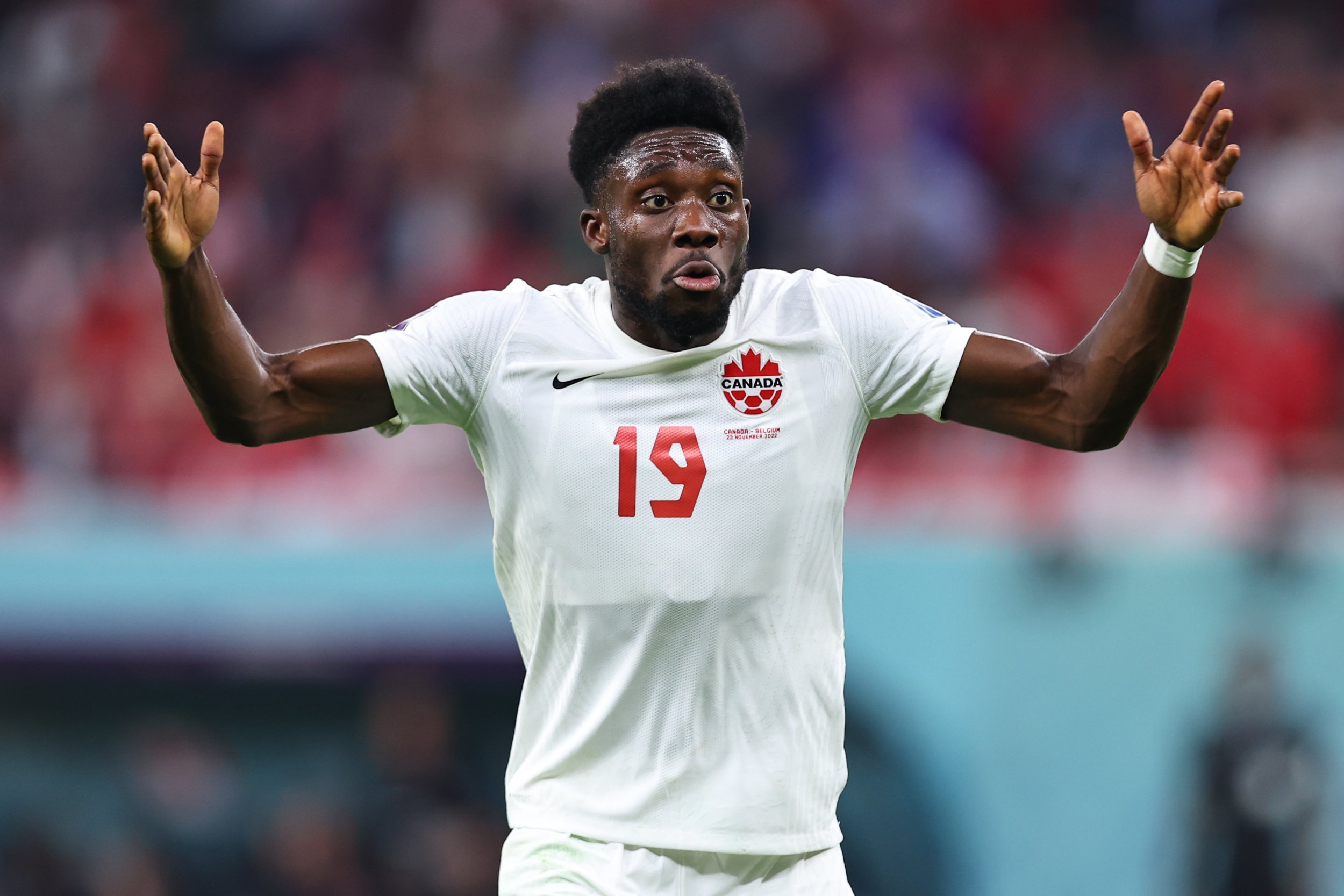 Alphonso Davies fluffed his chance to score Canada’s first ever World Cup goal when his weak penalty was stopped by Thibaut Courtois and Belgium went on to claim a scarcely deserved 1-0 victory.

Significant underdogs in Group F, Canada were nevertheless well supported at the Ahmad bin Ali Stadium and gave the thousands watching plenty to shout about in the early stages, dominating territory and earning a penalty when Tajon Buchanan’s shot struck an unknowing Yannick Carrasco’s hand.

A visit to the screen heralded a penalty, but Bayern Munich’s Davies found neither the corner or the back of the net, allowing one of the world’s best goalkeepers in Thibaut Courtois to deflect it away with his forearms.

Belgium were second-best for much of the first half, but Canada’s naivety showed when they were beaten by a simple ball over the top from Toby Alderweireld, latched onto by Michy Batshuayi, who was hapless for the rest of the night but for this one moment executed perfectly, lashing the ball into the far corner.

Substitute and all-time top goalscorer for his country Cyle Larin came the closest to converting any of Canada’s 21 shots into goals, his header easily collected in the end, while second on that list Jonathan David was there in body

Thibaut Courtois – Strong hand to save Davies’ penalty, however poor it was, and a fine block from Johnston’s well-struck shot. 8.

Leander Dendoncker – Plays in midfield for Wolves more often and did seem to struggle to contain Hoilett early on, and then Buchanan. So much so in fact that Martinez threw on Meunier, a more conventional full-back, to provide more cover than Castagne was. 5.

Toby Alderweireld – Not many defenders have 124 caps to their name and are still only the third-most experienced player in the line-up (behind Vertonghen and Witsel). Produced a raking long ball to set up Batshuayi’s opener. 7.

Jan Vertonghen – Better teams than Canada – who were far better than many expected – will lick their lips watching Vertonghen defend. 6.

Timothy Castagne – Did not provide anywhere near enough help for Dendoncker and was switched to the other flank, where Buchanan followed him and enjoyed similar success. 6.

Youri Tielemans – A stand-out player in the Premier League in the run-up to the World Cup but an utterly anonymous 45 minutes. Was one victim of what you can only assume was a Martinez rocket at half-time, crooked for Onana. 5.

Axel Witsel – Carelessness in possession summed up Belgium’s sloppy first half hour and very lucky not to give away a second penalty of the game when Laryea got the other side of him. 6.

Yannick Carrasco – An attacking selection at wing-back that perhaps suggested Martinez underestimated the threat of Canada. Crooked at half-time. 6.

Michy Batshuayi – Had three first-half shots: A tame effort from 30 yards, a close-range shot where he fluffed his first touch and a volley he hit with maybe 10 per cent of his foot. He got all of the ball when he was played in over the top though to give Belgium the least deserved of leads. So many poor touches at key moments, got to think Lukaku would have had two or three. 5.

Eden Hazard – Nice strength to open up Canada for the first time and pick out Tielemans but was still relatively peripheral. Lack of playing time at Real Madrid evident, only lasted an hour. 6.

Thomas Meunier – Had not played in five weeks after fracturing his cheek, hence the elaborate five-point velcro mask. Booked a little unfairly almost as soon as he came on, but then got lucky not to pick up another one when Buchanan skinned him. 6.

Amadou Onana – Made an appreciable difference to Belgium in midfield, if only by putting himself about and providing some energy. Strong argument he was his side’s best player. 7.

Leandro Trossard – Broke into the box for a chance to seal the game and ran it out past the byline before he could find a pass or a shot. 6.

Lois Openda – Decent amount of space afforded to him on the counter-attack but failed to capitalise on it. 6.

Milan Borjan – A nice easy early touch and then a very quiet first half until his defence let him down just before half-time. 7.

Alistair Johnston – Sloppy early pass suggested a few nerves and was glad to see it only result in a distant shot straight at the goalkeeper from Batshuayi. 6.

Steven Vitoria – Should have taken control of the long ball from Alderweireld that set up the opening goal. 6.

Kamal Miller – Brilliant block to stop Batshuayi in the first half, capitalising on the striker’s took a heavy touch, but then allowed him to get away far too easily for the first goal. 6.

Richie Laryea – Should have had an assist for the equaliser when he put the ball on a plate for Buchanan in first-half stoppage time. Stopped a near-certain goal when the game was stretched with 20 minutes to go, sliding in front of the ball after sprinting back. 7.

Atiba Hutchinson – The oldest outfield player in history to start a World Cup match at 39 years, 9 months and 15 days. An assured foot on the ball, dropping into the backline in possession. 7.

Stephen Eustaquio – Beautiful nutmeg on De Bruyne followed by a perfect, almost dainty cross, from which David should have scored the header just after the break. Whipped in another superlative cross to find Larin’s head but Courtois was alert to the threat. 8.

Alphonso Davies – Truthfully a poor spot kick that lacked conviction or direction. Came in nursing a hamstring concern and perhaps felt undermined because of it. Deployed in a deeper role, apparently to protect the injury, and it showed. 6.

Tajon Buchanan – Threatened the six-yard box with an early cross and it was his shot that struck Carrasco’s hand for the penalty. Switched sides after 25 minutes, perhaps to pick on Dendoncker, and caused more havoc. Only 23, fairly new at Club Brugge, but utterly fearless. Feels like the kind of player who might turn heads in the transfer window, but is still raw, as his close-range miss over the bar showed. 8.

Jonathan David – While the rest of the attack flourished in the pressure, David seemed to freeze in the first half, lacking the kind of sharpness that has garnered him 22 international goals in 35 caps. His biggest stage, and maybe his poorest game. Touch was nowhere, finishing lacked conviction. 5.

Junior Hoilett – Reading’s own and formerly of Blackburn, QPR and Cardiff, rolled back the years in the first 20 minutes. Lasted less than an hour and did fade but was great up until that point. 7.

Cyle Larin – Well-struck shot from outside the box looked like it might sneak in at the near post, and then worked Courtois with a header that needed a bit more pace. Looks like he will have an impact on this group from the bench. 7.

Sam Adekugbe – London-born, Canadian-raised and now playing in Turkey, was briefly a Manchester United youth player but could not drag Canada back into it from left-back. 6.

Jonathan Osorio – Came on for Eustaquio in the last 10 minutes. n/a