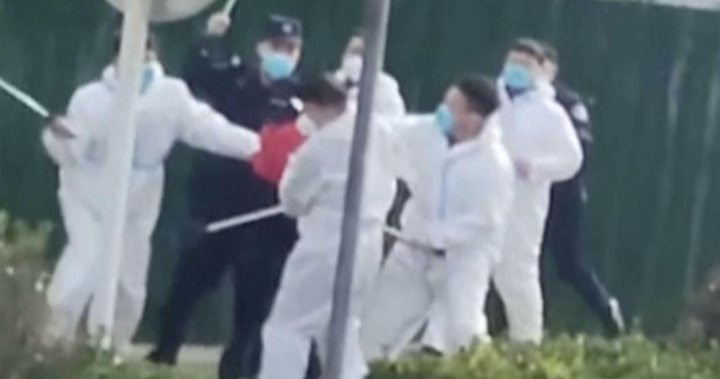 Foxconn Technology Group, a company that assembles iPhones in China, has issued an apology after protesting employees were beaten by police outside one of their factories.

Workers at the factory in Zhengzhou revolted this week, complaining that Foxconn changed the terms of wages offered to attract them to the roles. They also claimed that Foxconn had forced to share dormitories with colleagues who had tested positive for COVID-19.

Unrest is also spilling out into the general population in China, with many frustrated that the ruling Communist Party continues to push a “zero-COVID” strategy that often results in snap lockdowns that can last for weeks or months.

Although the ruling party recently promised to try to reduce disruptions by shortening quarantines, they continue their attempts to isolate every single case of the virus.

On Thursday, people in eight districts of Zhengzhou with a total of 6.6 million residents were told to stay home for five days. Daily mass testing was ordered for a “war of annihilation” against the virus.


Meanwhile, Apple Inc. is warning that it will ship fewer devices overseas in the coming weeks. Already, there have been reports of delays for the new iPhone 14 Pro and 14 Pro Max. CNN reported last week that some U.S. businesses have been told their phones won’t arrive until the new year.

In Zhengzhou, many of Foxconn’s newest employees travelled long distances to take jobs at the factory after Foxconn offered higher pay, reports The Associated Press.

To attract new workers, Foxconn offered 25,000 yuan ($4,663) for two months of work, according to employees, or almost 50 per cent more than news reports say its highest wages usually are.

However, Bloomberg reports that the factory’s workers found out that they wouldn’t receive the higher wages promised by Foxconn unless they stayed on the job until March 2023.


The Taiwanese company, which assembles electronics for Apple and other brands, blamed this week’s woes on a technology glitch in their computer system. They promised to pay employees their guaranteed rate.

“We apologize for an input error in the computer system and guarantee that the actual pay is the same as agreed and the official recruitment posters,” said a company statement. It promised to “try its best to actively solve the concerns and reasonable demands of employees.”

Videos posted to social media this week showed violent unrest outside the factory, with police in protective white suits seen violently attacking workers with clubs and kicking them during Tuesday and Wednesday’s protest. Workers were seen smashing surveillance cameras, busting through barricades and fighting security personnel.

Workers at the iPhone factory in Zhengzhou have had enough of zero Covid.

In keeping with its zero COVID policy, China orders six million people into lockdown in the iPhone factory city of Zhengzhou. The workers revolt. pic.twitter.com/oWahX1L4O8

The company is trying to rebuild the workforce after last month’s employee walkout over alleged unsafe conditions.

Thousands of Foxconn employees walked away from the factory in October, after they were put in a partial COVID lockdown early in the month, which then escalated into a “closed-loop” lockdown on the company’s Zhengzhou campus by mid-October. In a closed-loop lockdown, workers must live on-site to keep production running and limit their risk for COVID-19.

The lockdowns triggered a crisis where workers were caught on video hopping fences to escape the quarantine and hitching rides with passing truckers and motorists.

According to media reports at the time, hundreds of thousands of Foxconn workers were locked inside the plant with no clear idea of how many COVID-19 cases were active on the campus.

“We have Apple team members on the ground at our supplier Foxconn’s Zhengzhou facility,” Apple said in a statement, but did not release more details on supply delays. “We are reviewing the situation and working closely with Foxconn to ensure their employees’ concerns are addressed.”

— With files from The Associated Press, Reuters, and Global News’ Kathryn Mannie