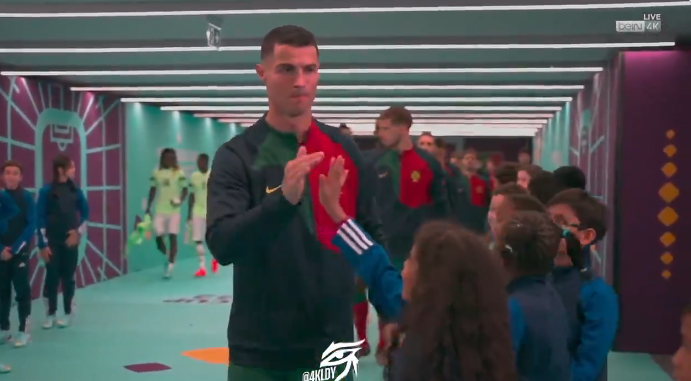 Cristiano Ronaldo made a number of dreams come true before even kicking a ball at the 2022 World Cup.

The Portugal captain is well known for inspiring children, with mascots often left completely awestruck just to be in his vicinity.

This time, though, he made sure all 22 were, with high fives all round ahead of kick-off in their Group H clash against Ghana.

The five-time Ballon d’Or winner was then seen in tears while the Portuguese national anthem was being played before the match.

The all-time top scorer in international and club football, Ronaldo is currently without a club after mutually agreeing to have his Manchester United contract terminated.

And now at the age of 37, he’s making sure to appreciate all the moments he has left in the game, including inspiring the next generation.

It’s far from the first time either with two mascots once left looking at each other in sheer joy after getting a smile off of the superstar.

And despite his unceremonial departure from Old Trafford, Ronaldo still remains an inspiration for players too.

His iconic ‘SIUUU’ celebration is often copied by teammates and opponents alike, but his latest effort has already spurned a craze.

The sleeping pose he adopted after a match-winning goal against Everton has already been taken on by a number of young stars.