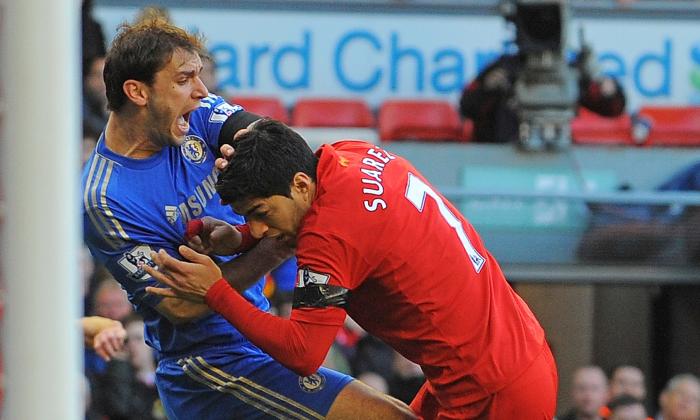 Luis Suarez is set for one last dance on the big stage as he looks to help Uruguay make waves at the World Cup in Qatar.

The former Liverpool, Barcelona and Atletico Madrid star has racked up a career of controversial moments during 16 years playing in Europe.

Yet the World Cup has been the stage where Suarez’s most infamous behaviour was on show.

The 35-year-old – who returned to boyhood club Nacional this summer and fired them to a title win – is looking to make his mark again at this year’s winter tournament.

Just maybe not in the way fans would be imagining…

How many times has Luis Suarez bitten a player?

Suarez has sunk his teeth into THREE different rivals during the course of his professional career.

The striker has played 848 career games for club and country – meaning the chances of Suarez biting another player are one in every 282 matches.

For context, the odds of getting bitten by a shark are 1 in 3.7million…

During his time as Ajax captain, Suarez was banned for seven games for biting PSV Eindhoven midfielder Bakkal’s shoulder in 2010.

Dutch newspaper De Telegraaf called the Uruguay star the ‘Cannibal of Ajax’ and it was a nickname that stuck through his career.

Suarez was banned retroactively for seven games and it proved to be his last appearance at the Eredivisie giants.

Three years later Suarez struck again with Ivanovic his next victim during a 2-2 draw between Liverpool and Chelsea in April 2013.

Again the incident was missed by the referee and, to add insult to injury, Suarez scored a later equaliser to rescue a point for the Reds.

The FA slapped the forward with a 10-game ban this time, which crucially carried over into the start of the 2013/14 campaign – the season Liverpool went onto lose the title by two points…

Another year, another shoulder… but this time Suarez had finally bitten off more than he could chew!

For a third time he avoided punishment at the time after leaving bite marks on Chiellini in Uruguay’s 1-0 win over Italy at the 2014 World Cup.

Yet Football’s governing body suspended Suarez from all football-related activity for four months.

He was additionally banned for nine international games, which ended his 2014 World Cup tournament.

Suarez joined Barcelona in a £75million deal from Liverpool during that summer, but his lengthy ban meant he did not make his debut for the Spanish giants until October 25.