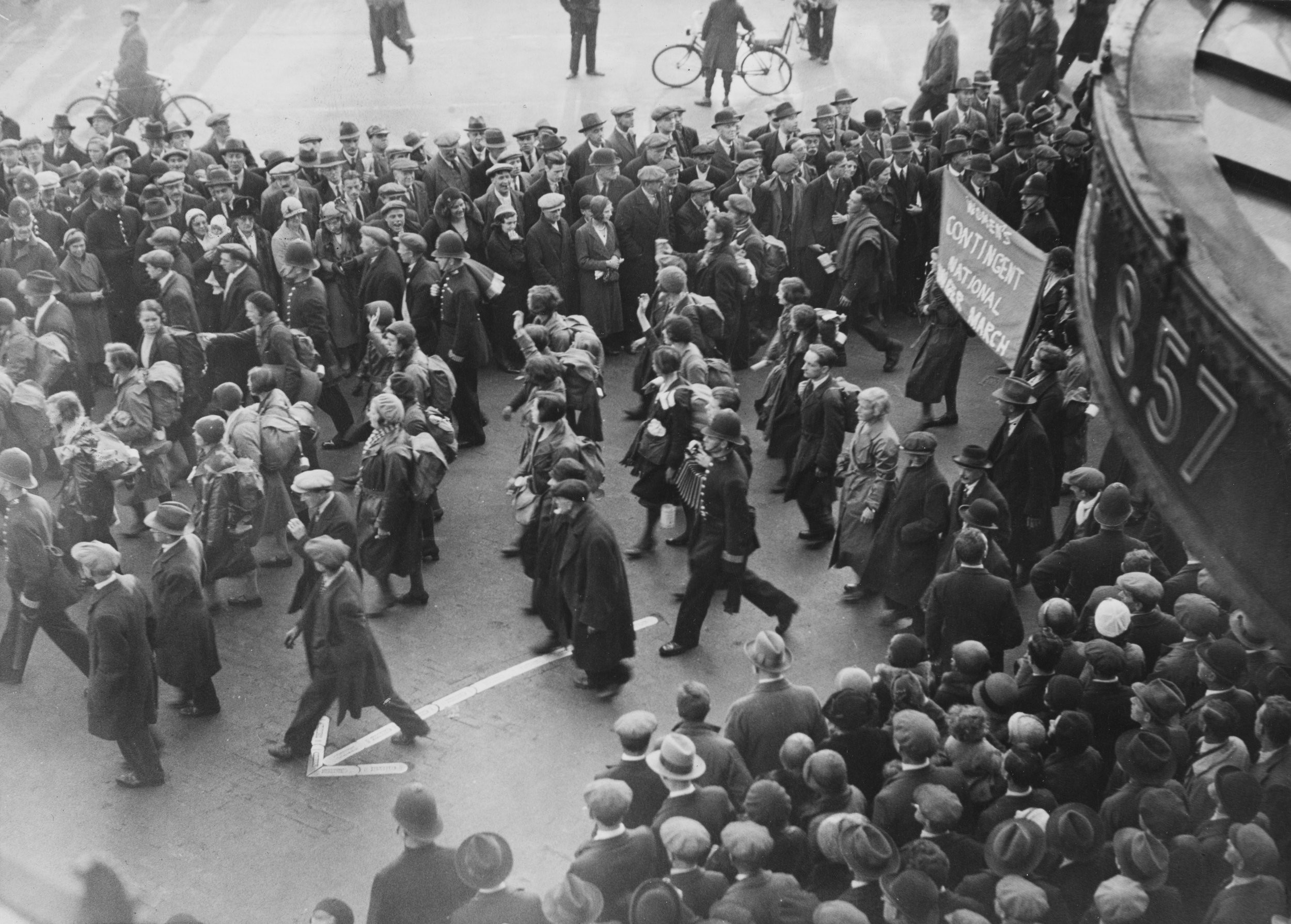 In the years leading up to the cost of living crisis, the question of food – what we eat, why and how we afford it – has become increasingly contentious. From a surge in takeaways over the pandemic to ever more lengthy food bank queues, there’s no getting away from it – our eating habits reflect the society in which we live.

As higher numbers of us are forced to think more about what we eat, or whether we can eat at all, our weekly Feeding Britain series sheds light on the complex ways food affects every one of us. From public health messaging around healthy eating to the history of food poverty in Britain, this series will leave no plate unturned.

This week, history professor Pat Thane looks back at historical attempts to tackle hunger over the past 100 years and considers how today’s measures compare.

Until very recently, most of us had never heard of food banks in Britain (though there has always been poverty of varying levels). For centuries, charities and public services provided it in various ways, as now, and with varying generosity.

Food banks as we know them are a recent phenomenon, invented in America in the 1960s. However, one recent change in Britain stands out: in the past, the evidence suggests that food was given to people who were destitute and unable to work due to sickness, old age, or other crises. Now we hear of people in respectable employment – teachers and nurses – needing food banks to feed their families due to rising costs and inadequate incomes.

It is not the only provider. There are hundreds, perhaps thousands, of food banks run by organisations including faith groups, community groups, schools, the Salvation Army, while others provide free or low-cost meals. It is no-one’s task to count them, and we have no idea of their numbers or of the total quantity of food needed and provided, though it is clearly a lot and growing. Trussell is unusual in its size and regular output of statistics. Its website points out – “Hunger in the UK isn’t about food. It’s about a lack of income”. So why is need growing?

All the evidence suggests that the UK is experiencing poverty levels unprecedented in our lifetimes and steadily increasing. Trussell Trust’s 2020/21 Report states that growing numbers of people are using food banks more frequently, for persistent need rather than temporary crises. Surveys by respected independent organisations, the Joseph Rowntree Foundation, the Institute for Fiscal Studies (IFS) and the Resolution Foundation, reveal that by 2017 around 23 per cent of the UK population, including 33 per cent of children, lived in poverty by the internationally accepted measure of incomes below 60 per cent of the national median, a majority in households including a worker.

In November 2018, the UN Special Rapporteur on Severe Poverty and Human Rights, Philip Alston, travelled around the UK studying poverty – an exceptional visit to a high-income country. His report expressed astonishment that the country with the fifth largest economy in the world had one-fifth of its population (14m) in poverty and 1.5m in destitution. He blamed “policies of austerity introduced in 2010” for the “shocking increase in food banks and major increases in homelessness and rough sleeping”, concluding that “much of the glue that has held British society together since the Second World War has been deliberately removed and replaced with a harsh and uncaring ethos”. He was ignored by the government.

Poverty increased further during and since the pandemic, and is worse in some regions, e.g. North East England, than others and among some ethnic minority groups, especially Bangladeshis and Pakistanis. The studies all conclude that the main causes are inadequate pay, rising housing costs especially private rents, and shrinking welfare support, especially since the introduction of Universal Credit. Too many hard-working people no longer earn enough to feed their families, problems currently worsened by zooming energy bills and inflation, including food prices.

There has never been a golden age without poverty in the UK, but it is hard to think of a time as bad as this since the beginning of the 20th century. Around 1900, Charles Booth and Seebohm Rowntree published major poverty surveys. Booth’s massive survey of London concluded that about 30 per cent of Londoners lived “in poverty or in want”. Rowntree surveyed poverty in York, which he knew well. He reckoned it was a typical English town, so might better indicate conditions across the country. He was shocked to discover that almost 28 per cent of the population were in “obvious want and squalor” with incomes insufficient for the “absolutely necessary” basic requirements of diet, clothing, rent, light and fuel.

Neither researcher discussed how, or whether, dietary needs were met. They agreed that the major cause of poverty was not, as widely believed at the time, idle shirking, but, as now, low pay for full-time work, or precarious under-employment, inability to get regular full-time work despite best efforts to do so. Poverty is now differently measured relative to the higher standards of the modern world, but it is generally accepted that past and present measures convey real comparability of life chances.

Revelations of such poverty in one of the richest countries in the world caused widespread shock and demands for state action, supported by the growing trade union movement and the Labour Party which was founded in 1900. Labour secretly agreed with the Liberals that in the election of 1905 they would not oppose one another in seats where this would split anti-Conservative votes. The Conservatives lost the election after 20 years in power. Labour and Liberal Democrats might reflect on this experience today.

The Liberals then implemented the first measures of what became the Welfare State. A bill introduced by a Labour MP in 1906 provided the first free school meals for needy children. Child malnutrition caused as much concern then as now. In 1908 another impoverished group received the first state old age pensions, means-tested to target the poorest. National Health Insurance and Unemployment Insurance were introduced in 1911, with adequate benefits funded by workers’ contributions.

State welfare slowly expanded during and after the First World War following organised protest, the growth of the Labour party, and the Russian revolution, scaring politicians into action to counter the threat of socialism. In 1915, a rent strike by Glasgow women brought about rent controls, which survived to 1988. From 1919 came the first government-funded council housing, improved state education, health and welfare services and extended unemployment benefits. Between the wars, there was a steady – though locally uneven – extension of publicly provided welfare and increased government spending despite the economic depression. Charities continued to give food to those in need especially in areas of high unemployment. Not for nothing were the protest marches of thin, poorly clad, unemployed men called “Hunger Marches”.

During the Second World War, the government sustained public morale by providing healthy food, rationed at controlled prices, improving the diets of low-income families, and supplying most schoolchildren with free milk and free or cheap meals. The post-war Labour government continued to control food supplies and prices, revived the economy, and created full employment for the first time in peacetime while creating the modern welfare state. They did not achieve all their ambitions and poverty was never eliminated, but living standards rose and improved benefits protected the poorest from starvation.

Higher living standards survived to the 1970s, reluctantly sustained even by Conservative governments. The post-war decades were not a golden age, as they are described in some European countries, but living conditions were better for more people than at any time before or since. The IFS has calculated that from the mid-1960s to the mid-70s, poverty and inequality of income and wealth were at their lowest levels of the century, mainly due to high employment, improved pay, state welfare, and taxation of top incomes by Labour governments.

Unemployment rose above 1 million from 1975 for the first time since the war and inflation grew, largely due to an international rise in oil prices. Yet, contrary to the popular picture of the 70s as a time of strife and depression, from 1974-79, under a Labour government, welfare services and benefits rose to their highest level of the century. Unemployed people received adequate benefits, and pay generally improved, owing much to trade unions which reached their peak membership, 50 per cent of all workers. Food banks were unheard of. Adequate pay and welfare for those unable to work made food charity rarely necessary. Good, affordable housing was available for most who needed it. Later surveys suggested that most people felt it was a decade when conditions improved and there had been real improvement since 1945.

Then from 1979 Margaret Thatcher’s Conservative government was vigorously committed to unfettered free enterprise and dismantling the welfare state. Severe poverty returned. By 1982 unemployment rose above 3 million, the highest level since the 1930s, remaining very high throughout her time in office and that of her successor John Major to 1997. Child poverty rose from about 13 per cent of all children in 1979, to 34 per cent in 1991, due to unemployment and cuts to benefits. Council houses were sold at giveaway prices without replacement, and rent controls abolished.

Homelessness and rough sleeping emerged as serious problems. Prices rose, average incomes did not, while top salaries rose sharply and the gap between rich and poor began a rise which hasn’t stopped. Britain was now one of the most unequal societies in the developed world. For very many people, the 1980s was a more dismal decade than the 1970s. Charities did their best to cover the gaps created by a shrinking welfare state. There were improvements under New Labour from 1997 until the financial crisis of 2007-10.

Since 2010 the Austerity policies of successive governments have made further severe cuts to welfare, poverty has risen to the levels described above and growth continues. Trussell, and others, report increasing demand for food banks, including from people who have never used them before, while donations are declining, perhaps another response to the rising cost-of-living with potentially devastating consequences for starving people. Officially, unemployment remains low – lowest since the mid -1970s, the government boasts – but, unlike the 70s, work is often poorly paid in the “gig economy”. Following deregulation, more workers are on low incomes and in precarious employment. More employers evade the minimum wage and provision of sickness and holiday pay and pensions by imposing fake self-employment and insecure contracts.

The extent of food poverty suggests that we have returned to levels and causes of poverty comparable only to the early 20th century. In the 1900s, it led to the beginnings of a welfare state that produced solutions. The worry now is that this time, poverty and malnutrition have aroused far less concern and fewer demands for change from politicians and the wider public.