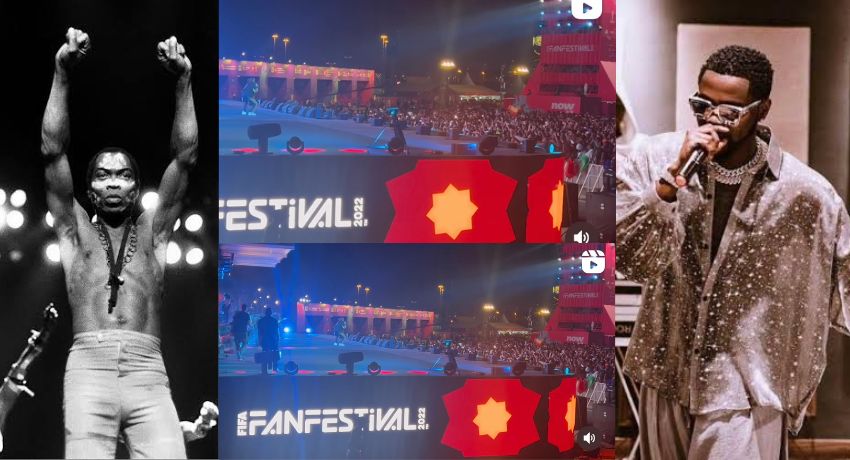 The 28-year-old and his music crew honoured Fela during his performance at the world event on Wednesday, November 23.

Kizz Daniel honoured the Afrobeat star by performing one of his hit songs ‘African Woman’ on stage while the audience cheered him on.

Captioning the video, the father of two wrote:

Fela died on August 2, 1997, sending fans all over the world into a state of shock.

Kizz Daniel, whose dream of performing at the World Cup was finally achieved on Wednesday also thrilled the audience with his hit songs ‘Buga’ and ‘Cough’, making the crowd eager for more.

Kizz Daniel also posted clips of his performance at the event on his Instagram page where he expressed gratitude to his fans all over the world. He wrote:

“AS A NAIJA BOY SAY THANK YOU AFRICA THANK YOU WORLD.”

Before he was announced as one of the headliners for the event, Kizz Daniel born Daniel Anidugbe had expressed his desire to perform his hit song ‘Buga’ at the World Cup.

Kizz Daniel said this in a tweet on June 23 after the release of the music video which became an instant hit. He wrote:

“God I want to perform BUGA for World Cup with a mass choir help me say amen #qatar2022worldcup.”

Other artistes slated to perform at Al Bayt Stadium include American DJ Thomas Wesley better known as Diplo who would be performing today, November 22, Canadian actress, dancer and singer Nora Fatehi who is set to perform on November 29 after Kizz Daniel, American singer and songwriter Trinidad Cardona who would be performing on December 1 and award-winning DJ Calvin Harris set to perform on December 10.