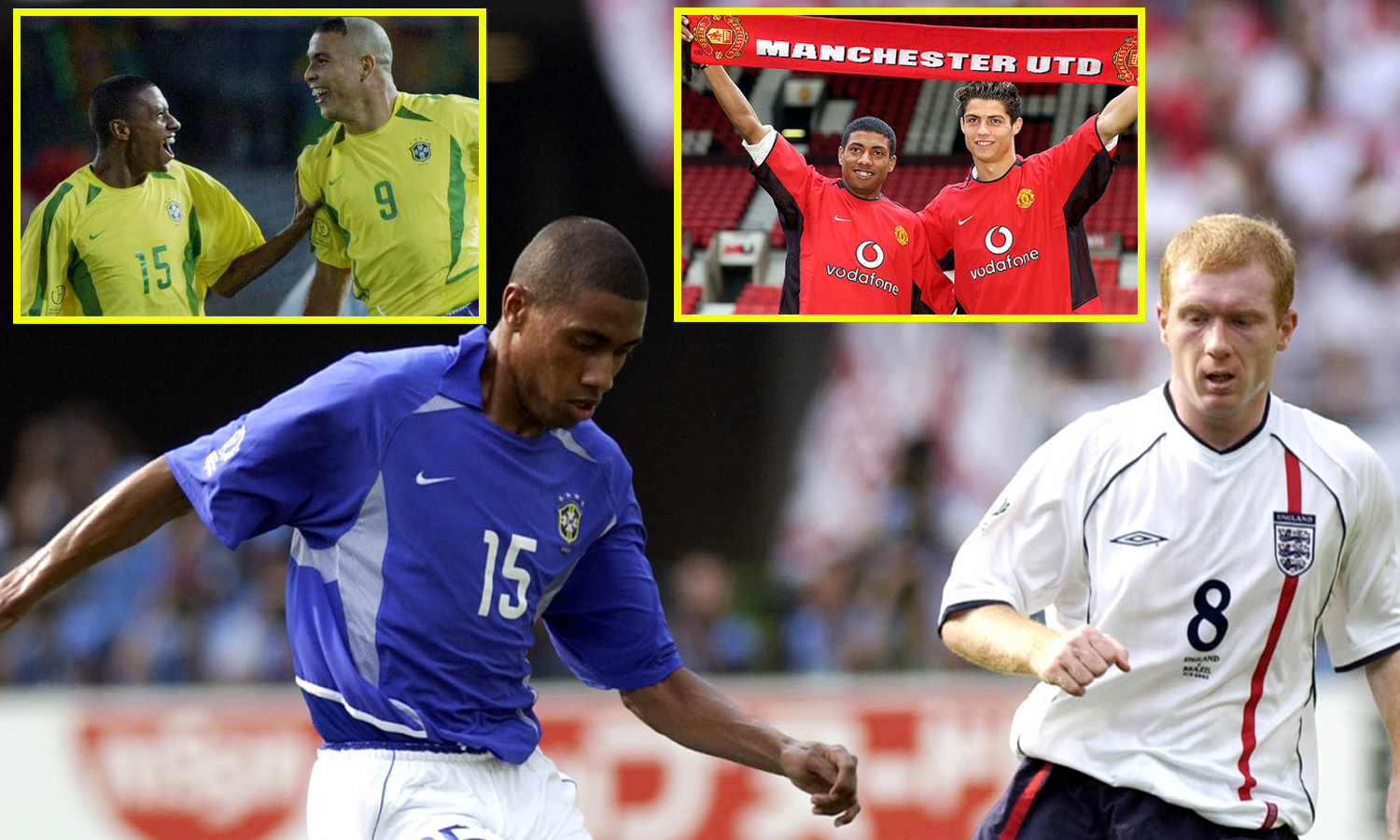 What is the first thing that comes to mind when you hear the name Kleberson?

Is it the time he put Paul Scholes in his pocket to help dump England out of the 2002 World Cup in the quarter-finals?

Or perhaps the virtuoso display during Brazil’s 2-0 win over Germany in the final, when he hit the crossbar from 30 yards out and then created Ronaldo’s second goal?

No, be honest. It is neither of those things. We remember that Kleberson was utterly crap at Manchester United.

One had braces on his teeth and many considered him one of the most promising players in world football. The other was Cristiano Ronaldo.

Kleberson’s performances at the 2002 World Cup caught the eye of Barcelona, Newcastle, Leeds and Celtic – but it was United who secured his services in a £6.5million deal with Atletico Paranaense.

And why wouldn’t they? Brazil’s 2002 World Cup-winning manager Luis Felipe Scolari described Kleberson as the ‘driving force’ behind one of the greatest teams in history.

“He was always the first name on the team list, ahead of players like Ronaldo,” said Scolari.

Just so we’re clear, ‘players like Ronaldo’ is a blanket term for Rivaldo, Ronaldinho, Gilberto Silva, Cafu and Roberto Carlos.

Scolari added: “Kleberson will have no problem adapting to The Premiership.”

Spoiler alert: he did. But before we get to that, let’s reminiss on the pinacle of Kleberson’s career, which lasted about a week.

Scolari saw something in Kleberson during his time at Paranaense, where he won the Brazilian Serie A title in 2001.

Nevertheless, the young midfielder was relatively unknown outside South America and a surprise name in the squad for the pre-tournament favourites.

Despite sitting on the bench for the early stages of Brazil’s 2002 World Cup campaign, a 23-year-old Kleberson would be handed an opportunity against Sven Goran-Eriksson’s Three Lions in the last-eight.

The history books will remember Ronaldinho lobbing David Seaman from distance, but Scholes, another generational player, may not have seen it from Kleberson’s back pocket.

He kept his place in the team for the 1-0 victory over Turkey in the semi-finals – but it was the final against Germany when the midfielder truly came to life.

Kleberson was denied a famous goal when he struck the crossbar from 30 yards out, although he did supply the crucial pass for Ronaldo’s second.

In true Samba style, Rivaldo allowed Kleberson’s ball to pass through his legs and as Ronaldo did the rest, the midfielder looked truly at home in the most elite company.

But, unfortunately for Sir Alex and United, this was all a fascade.

It was actually Ronaldinho who convinced Kleberson to sign for the Red Devils, amid rumours the superstar forward could also be on his way to Manchester.

However, new Barcelona president Joan Laporta had promised fans a marquee signing and missed out on Beckham when he left United for Real Madrid.

Instead, the Catalans swooped in for Ronaldinho, leaving Kleberson at United with no friends and no grasp on the English language.

In the end, Kleberson lacked the quality and composure to thrive in the Premier League, and left Old Trafford after 20 top-flight appearances over two seasons.

A dislocated shoulder in his second game did not help – and it was ironically Ronaldo who came on to replace him that day, as he did throughout Kleberson’s United career.

The Brazilian scored twice for the Red Devils and showed glimpses of the dynamic box-to-box midfielder he could be, but only on rare occasions.

His struggles left everyone dumbfounded, not least his midfield partner and captain Roy Keane.

Eric Djemba-Djemba, another midfield flop signed for United on the same day as Kleberson, recently lifted the lid on a feisty exchange.

He said: “Keane had a right go at Kleberson! Kleberson looked like he didn’t want to play with his body language, and wanted to play slowly.

“I remember one Champions League game at Old Trafford, we went into the dressing room and Roy Keane was screaming at him!

“He said ‘You need to wake-up! You need to give everything, you need to tackle! Why don’t you want to want to play? You just won The World Cup! What’s happened? You need to play better!’

“It was definitely scary for Kleberson. He was always smiling, and was still smiling when Keane had a go at him, which would have made Keane even more angry.”

Kleberson was sold to Besiktas for less than £2m in 2005 – and his time in Turkey was even more ill-fated.

Looking back, he admitted the Premier League was too much for him.

Speaking to the Manchester Evening News back in 2019, Kleberson said: “In my time at United, there was a great team with world class players. I came with a lot of change in the team, there was five or six new players and the club were losing a couple of good players.

“We came in strong mentally to try and help the team, and of course we were doing well, then the team is doing well; players adapt to this and bring their best performance.”

He added: “When the team isn’t doing well, it’s hard to change your style, I couldn’t do it, when I came to Man United I tried to change the player I was, more passes, more aggression, more tackles, but it’s too hard and wasn’t what my game was about.

“From 17 to 24 years old, I was playing that fluent Brazilian style, to move the ball quickly and receive it in space. At Man United I had tough moments a lot of the time, I got a lot of injuries and struggled a lot.

“It was a difficult time, and when you see a lot of evaluation from your performance at top teams the criticism can be very high, particularly at Man United.”

Brazil are among the favouries at Qatar 2022 – and United midfielders Casemiro and Fred will be hoping to play their part.

Maybe they should have a word with Kleberson before they board the plane.