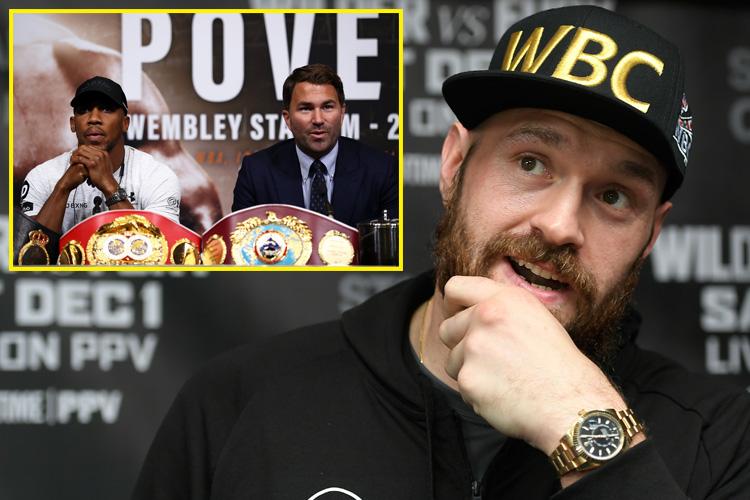 Eddie Hearn is optimistic that a fight between his client, Anthony Joshua, and Tyson Fury will happen sooner rather than later.

Last week, The Gypsy King breathed new life into the British blockbuster as he insisted he could not happily retire without sharing the ring with AJ.

“I don’t think I can retire today because I need that Joshua fight. We have been trying to make that fight for years. It’s the fight that people want to see,” Fury said.

“It’s the fight that I want to see as a boxing fan. I think it would be an absolute dying travesty if me and Joshua didn’t fight in this era.”

A few days later, Fury distanced himself from the fight with Joshua who he branded a coward: “I don’t fight cowards; I only fight real men,” he insisted.

“So, to say that’s a glamour fight? No way. My glamour fight was fighting the 43-0 Deontay Wilder in America.”

The Matchroom Sports Chairman is becoming frustrated by Fury constantly contradicting himself and believes many fight fans are annoyed by it as well.

“Two or three days ago he said he couldn’t retire unless he fought AJ, and he needs that fight badly,” Hearn told IFL TV when asked about Fury distantcing himself from a fight with Joshua.

“You’re seeing now from the social media responses, people are starting to come to terms with it doesn’t really make sense what he’s saying. Let him go on.”

Despite Fury’s constant flip-flopping on a potential fight with Joshua, Hearn believes the match-up could be booked before an undisputed fight with Oleksandr Usyk.

“Maybe he fights AJ instead of Usyk. I wouldn’t even be surprised. That fight’s so big with AJ that sometimes you just get together and you make the fight instantly,” he added.

Fury and Usyk are expected to clash for all the heavyweight belts in the first quarter of 2023, provided Derek Chisora doesn’t cause an upset when he takes on the WBC heavyweight champion on December 3 at Tottenham Hotspur Stadium.

However, the 34-year-old Brit recently suggested he will fight Joe Joyce if Usyk is not ready by February and therefore could be open to taking on Joshua who remains one of the biggest names in boxing.