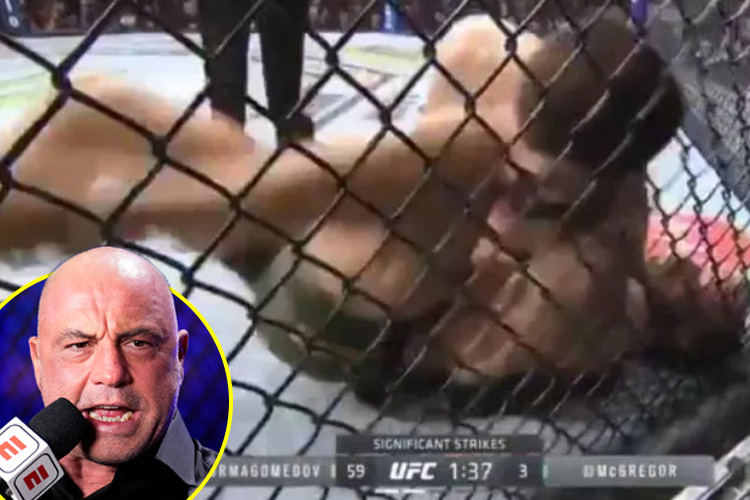 Former dual-weight UFC champion Conor McGregor is proud of one particular shot he landed on Khabib Nurmagomedov in 2019.

‘Notorious’ was no match for his biggest rival when they met at UFC 229 and was dominated on the floor before falling to a fourth-round submission defeat.

In the second round, McGregor was shockingly dropped by ‘The Eagle’ who ended up in top position and appeared on the verge of finishing the Irishman.

However, despite being on his back ‘Mystic Mac’ threw and landed a vicious knee to his opponent’s face – which is illegal – and proudly looked back on the shot during his latest social media rant.

“I call this knee strike “the springbok” Remember reebok? Ye well this is springbok,” McGregor tweeted.

“You ever see a springbok jump? Well just have a look at that knee springbok into this eye sock hahahaja I’m the goat of unseen shots. That’s without question. God bless the dead.”

The 34-year-old then added a picture of the medium-sized antelope, with the caption: “This is a springbok, I’m just after makin’ them. Springboks are made now ye.”

While McGregor was impressed with the initiative shot he landed at UFC 229, Rogan was not and made that much clear while commenting on the fight.

“That was an illegal knee on the ground by Conor – a knee to the head of a downed opponent,” he said.

Three years later it appears the UFC legend is still miffed about Rogan’s comments about his ‘Springbok knee’ as he branded him a ‘little fool’ before mimicking and mocking him in a since-deleted voice note.

“’That was an illegal knee on the head of a grounded opponent.’ “Shut up, Joe, you little fool,” McGregor said.

“What are you talking about ‘smash this and smash that’? I was smashing my knee into his f***ing eye socket, yeah?”

“He then mocked Rogan by mimicking his commentary again: ‘That’s a knee to a grounded opponent, call the cops.’”

The biggest star in MMA history is currently gearing up for his eagerly anticipated UFC comeback after being sidelined due to injury since July 2021.

McGregor has seriously bulked up during his time away from the sport and is expected to attempt a welterweight title run when he returns in 2023.

He says he will complete two tests with the United States Anti-Doping Agency (USADA) in February and look to book a fight.

The knee into the eye socket was illegal yes, from this position. A beauty tho. Never before seen shot. Like many of my shots.
I use the mount defence leg as a spring board, loading the knee below it. Release and straight to the eye socket. Smashed it in! @joerogan. Hey Dana 😂 pic.twitter.com/qZAcbbuIHS