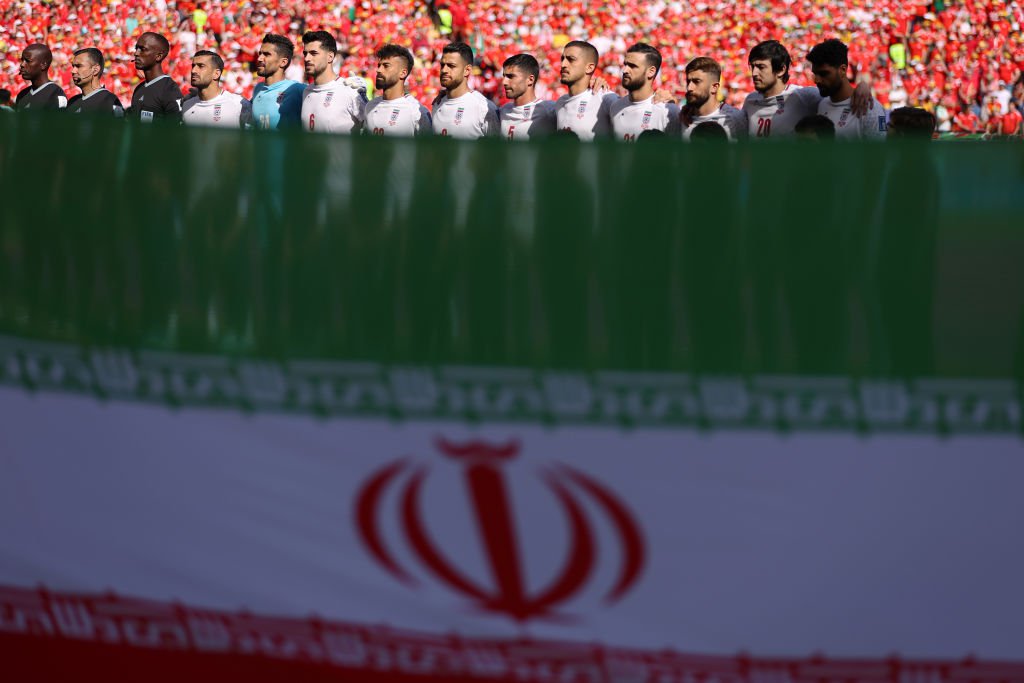 In previous World Cups, watching Iran has afforded me a few 90-minute slots in which I indulge in what it would be like to be a country with positive associations on the international stage.

In 2014, there was the World Cup match against Argentina, in which Lionel Messi only managed to score after 91 minutes of unrelenting defence, and in 2018 when goalkeeper Alireza Beiranvand miraculously saved a penalty kick against Cristiano Ronaldo. Our players represented to me an Iran that would rise victorious – despite the tyranny, the economic mismanagement, the discrimination – especially given all the adversity that players such as Beiranvand had overcome.

This year, however, the World Cup has been torturous to watch. The fantasy world of 2014 and 2018 no longer has its sheen; I have lost my ability to pretend.

Protests erupting after the death of Mahsa Amini have been met with brute force, with security forces killing 348 individuals, including nine-year-old Kian Pirfalak. These protests rang the death knell on any possibility of reform or gradual liberalisation. For Kian to have been shot as he sat in the car with his father, defenceless, tells me that this is a regime that would prefer to rule by scorched earth, murdering its civilians until there is both no more resistance and nothing left of the country.

So when it has come to cheering on the country, I have struggled to unconditionally support the team – especially as questions surfaced about the extent of their commitment to the protest movement.

At first, there was hope that the team, with the eyes of the world upon them, would bring awareness to the protests. In a country with no political opposition, footballers have always been a vessel into which Iranians could lodge their hopes and dreams – a common protest chant is the names of two of Iran’s most illustrious players, Ali Karimi and Ali Daie, the latter boycotting the World Cup to stay close to the protests at home.

Initially, the players seemed to meet the moment: Captain Ehsan Hajsafi told reporters the day before the England match that “the conditions in our country are not right”, beginning his interview with the words “in the name of the God of rainbows”, a reference to a video shared of Kian by his mourning family. Two weeks before, Saeed Piramoon referenced the female protestors by mimicking cutting his hair after scoring. Meanwhile, Sardar Azmoun stated in a now deleted Instagram post, “I don’t care if I’m sacked. Shame on you for killing people so easily. Viva Iranian women.”

But then, photos emerged of the players meeting President Raisi to present him with a jersey. During the England match, fans shouted “traitor” at the team, even as they stood stony-faced, refusing to sing the national anthem. As Beiranvand was taken off the pitch in a stretcher, protestors insinuated divine retribution, posting photos of the goalkeeper meeting president Raisi, juxtaposed with his bloodied nose. When the players caved and sung the national anthem in the Wales match four days later, spectators sobbed.

I watched the matches with my heart in my mouth. Seeing the players’ haggard faces, the anger in the crowd, the screams of the protestors outside the stadium, I think of this nation of individuals, each mourning for someone. My friends and I were conflicted. As one friend admitted: “If the regime threatened my family, I wouldn’t just give Raisi a jersey, I’d kiss his feet”. Another argued that with great power comes great responsibility and so the team’s international exposure should be leveraged to the benefit of the country, no matter the cost. In comparison to female athletes such as Elnaz Rekabi, now under house arrest, and the basketball team who competed without a hijab at much greater risk to themselves, it didn’t seem so demanding to ask the football team for more courage.

A part of me, though, is deeply uncomfortable with asking another Iranian, victimised like the rest of us, to make a sacrifice that could provoke the ire of the regime. This is a regime that has no red lines, and that has a tool in their arsenal much stronger than any weapon: threatening our families. As news came out that the team may “face reprisals” for not singing the anthem, and UK pundits mocked the England players for failing to wear the armband by comparing them to the Iran team’s “bravery”, my rage mixed with guilt. I wondered whether I was directing my anger at the wrong people, when at the root of this lies a murderous, despotic regime and not a bunch of footballers.

But I can’t dismiss the demands of Iranian protestors for a stronger stance from the football team, when, with no international profile, they place themselves at much greater risk than the team when they protest each day. Hundreds of protestors have paid the ultimate sacrifice, such as Ghazaleh Chelabi, whose last moments before she was shot were captured on her phone, She filmed the surrounding protests and chanted “don’t be scared, we’re all together”.

Motivated by the goal of a better Iran, Ghazaleh and others have been fearless – and in response, security forces amped up the brutality and killed them. When protestors continue to flood the streets even after the murders, not singing the national anthem pales in comparison.

Aside from my fear for those back home, my anger at the team, my hope, my endless resentment of the regime, my guilt, what remains is a keen sense of tragedy. There’s the fact that everyday Iranians must give up their lives, their family, their future, to right the wrongs of a regime they never voted for. And there’s the reality that until we have peace, there will continue to be millions of silent tragedies that culminate in a suffocating crescendo, such as being unable to enjoy a game of football without thinking of revolution and death.

Tiara Sahar Ataii works in humanitarian response for the UN and major iNGOs in 11 countries. She founded the largest student-led charity worldwide, SolidariTee, fighting for long-term change in the refugee crisis