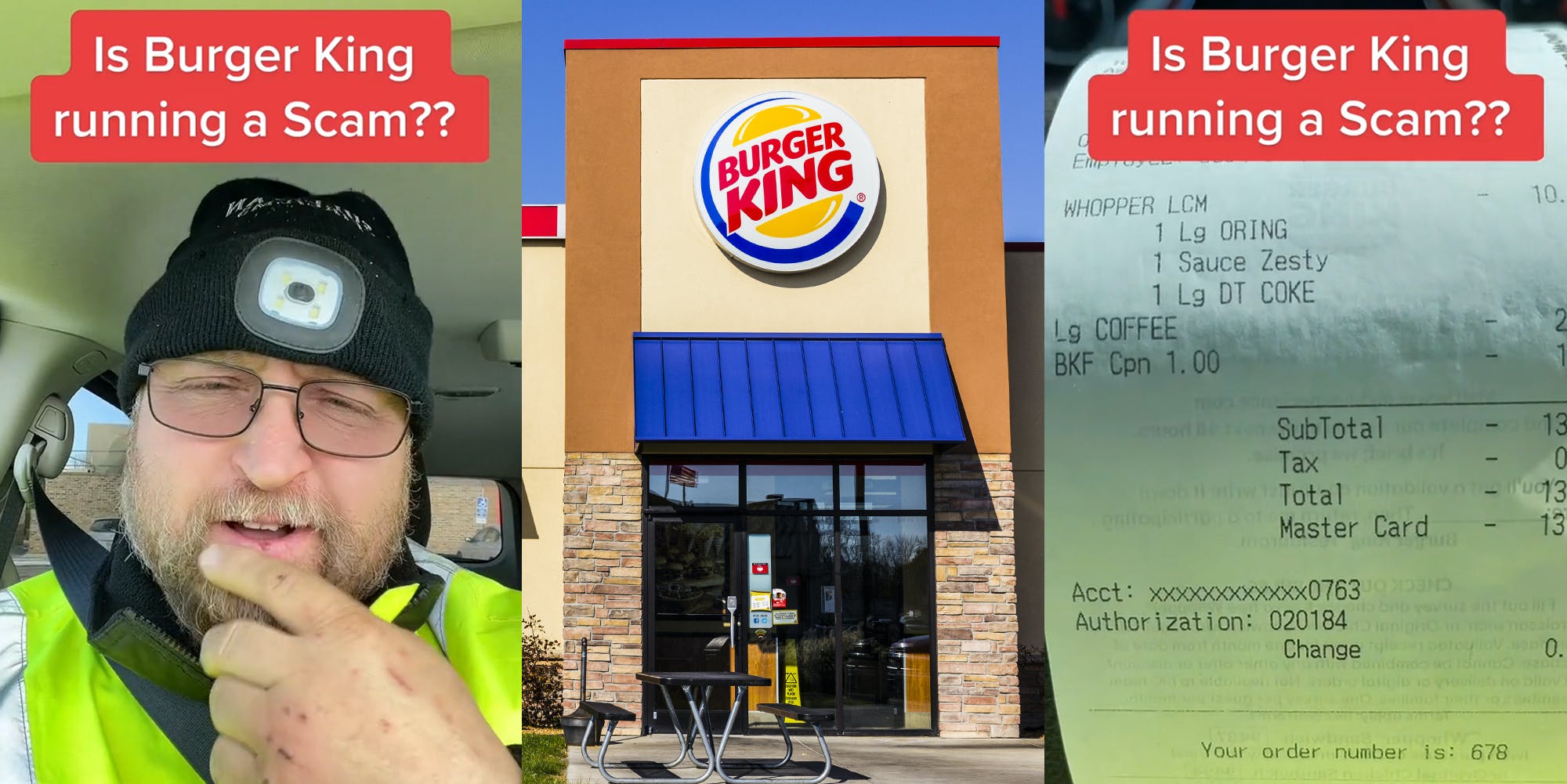 It’s always a nice surprise to receive a free coupon with a meal. A less nice surprise is finding out you paid for one without asking.

That’s what TikTok user Keith (@krowebeatthebetes) claims happened to him after a recent trip to Burger King.

Upon leaving the restaurant, he noticed a charge for $1 marked “BKF Cpn” on his receipt. When he looked in the bag, he discovered that he had been given—or rather, charged for—a coupon good for a soft serve cone or small fry with any purchase.

“I know it’s not really such a big deal, and it’s only a buck, but beware of that,” Keith says. In the text overlaying the video, he asks, “Is Burger King running a Scam??”

@krowebeatthebetes Strange happenings at the Burger King!! I got the coffee in case you were wondering. Love you Peeps!! #scam #burgerking #buyerbeware ♬ original sound – Keith Rowe

In a phone call with Daily Dot, Keith explained that while his TikTok page usually focuses on helping people with diabetes and insulin issues, this incident at Burger King didn’t sit well with him. After a discussion with his wife, he decided to post about it on TikTok, where it quickly attracted attention.

According to Keith, his wife noticed the initial $1 while they were checking out. Suspicious, the couple asked for a receipt, to which the employee apparently reluctantly obliged.

When they looked at the receipt and confirmed the $1 charge, Keith’s wife went into the store and demanded an explanation. After a bit of arguing, the employee gave Keith’s wife her money back, allowing her to keep the coupon. The employee allegedly avoided a question about how often the store charged people for a coupon without asking.

It is not uncommon for Burger King to ask customers if they want to buy a coupon to support their Burger King Foundation; the small print on Keith’s coupon confirms it was related to this program.

But, importantly, the program appears to require the consent of the customer, which Keith did not give.

“THEYRE SUPPOSED TO ASK YOU FIRST!!!” exclaimed a TikTok commenter. “ours has been asking me and I keep saying no, why would I spend a $1 on something that’s $1!”

“I went & was asked to donate $1 to their education fund thing and I said yes & I got the same coupon,” alleged an additional TikToker. “They are supposed to ASK.”

Keith claimed on the phone that multiple users have told him that they had similar experiences at Burger King regarding these coupons. Some of these users speculated that employees would be offered a reward for selling a large number of coupons. Although this is unconfirmed, Keith expressed sympathy for employees put into that position.

Back on TikTok, many users encouraged Keith to pursue legal action.

“Auto-charging a dollar for something that says FREE might need to be brought to your state AGs attention,” wrote one user.

“Sounds like a class action lawsuit if they are doing this,” offered another.

On the phone, Keith said that he was not interested in legal action—he simply wanted to share his experience as a warning for others.

As many commenters noted, and Keith agreed, these small charges can add up, especially for families who are watching their budgets.

“Imagine all the people who [don’t] take the receipt,” said a commenter. “They see a ‘free’ coupon. But little do they know they paid for it.”

“[It’s] a big deal,” claimed a further TikToker. “multiply that dollar by millions that people did not order.”

The Daily Dot reached out to Burger King via email.

Braden Bjella is a culture writer. His work can be found in Mixmag, Electronic Beats, Schön! magazine, and more.