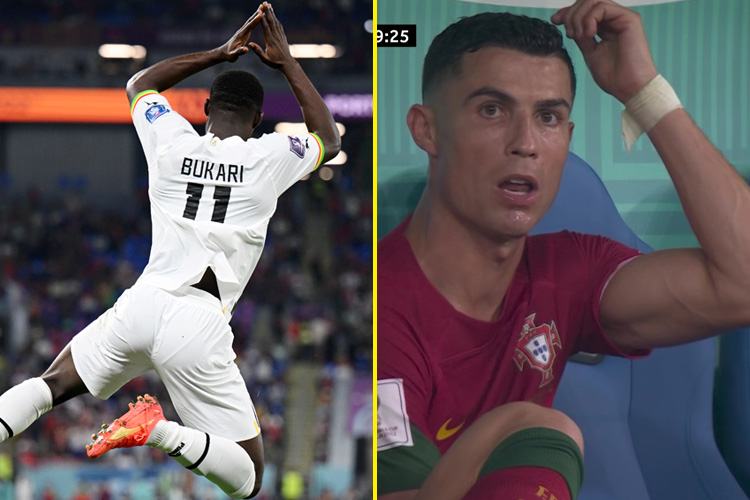 The Portugal captain had already got the crowd to shout ‘Siuuu’ as he celebrated scoring a penalty just over the hour mark in the World Cup group game between the two nations.

Andre Ayew then rose to level for Ghana, only for Fernandos Santos’ side to score two more goals.

But after Ronaldo came off with his side firmly ahead, Ghana’s Bukari pulled one back for his side as the clock edged towards full-time.

And the Ghana star clearly had one thing on his mind as he sent the ball into the back of the net.

As he ran towards the corner flag and cheekily let out Ronaldo’s signature ‘SIUUU’.

Cameras then panned to the former Manchester United player sat on the bench, who threw his hands in the air in frustration.

It was more in frustration at conceding as the game sprang into life in the second half after a dull first 45 minutes.

Ghana were desperate to get an equaliser and came so close in the final stages when Inaki Williams tried to pounce on a Diogo Costa error.

Hiding behind the Portugal goalkeeper, Williams waited for Costa to put the ball on the floor and when he did, he stole the ball for what seemed like a late equaliser, but slipped when it mattered.

Ghana now face tough clashes with South Korea and Uruguay in a bid to qualify for the knockout stages.