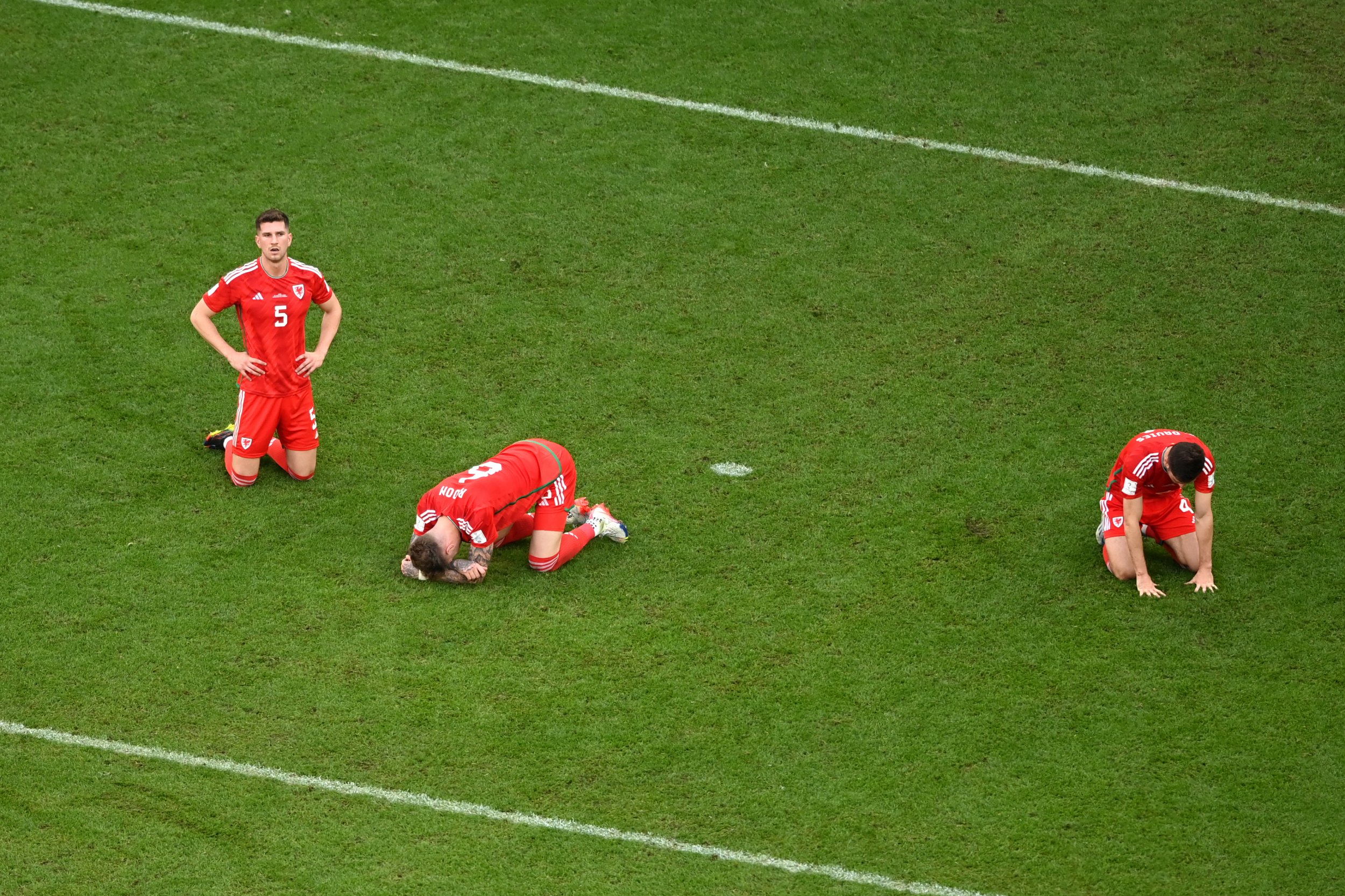 After taking 58 years to grace this grand old stage again, Wales’ dream of reaching the World Cup knockout stages lies in tatters after a dramatic encounter against Iran ended in an agonising injury-time defeat.

Roozbeh Cheshmi’s strike from distance in the eighth minute of added time was the least Iran deserved for a dominant display in Al Rayyan, with Ramin Rezaeian compounding Welsh misery a few minutes later with the second as Rob Page’s side piled forward in search of an equaliser. Wales’ tournament is not over yet, but they will need to improve considerably against England, while hoping that results elsewhere go their way.

Wales must have been wondering why Iran had saved this level of performance for them and not England after being met with ferocious pressing and no shortage of quality from their opponents. The inclusion of Sardar Azmoun from the start certainly helped the Iranians, as he and strike partner Medhi Taremi gave the Welsh back three plenty to ponder with their clever movement and link-up play.

Azmoun’s decision-making benefited Wales early on, however, when he squared to Ali Gholizadeh to tap into an empty net rather than shoot himself, with his teammate clearly in an offside position. Iran certainly looked the more likely to open the scoring but more often than not were faced with a red wall as Welsh bodies flung themselves in the way of anything resembling a shot.

Hennessey’s goal was evidently living a charmed life. In the space of 15 seconds both Azmoun and Gholizadeh had rattled the post with the former then kept out from point-blank range by the Wales keeper. The veteran shot-stopper held up his end of the bargain too, making a fine finger-tip stop from Saeid Ezatolahi as Wales desperately clung on.

Having played an integral part in Wales’ defensive resistance, Hennessey then put his team in a tight spot late on by getting himself sent off for a rash challenge on Taremi after haring out of his goal. Initially, he looked to have got away with his Harald Schumacher impression, but it was only a temporary reprieve as VAR intervened.

As was the case before Iran’s opener against England and will remain the case for any game Carlos Queiroz’s side play at this tournament, it was impossible to focus solely on the football. The players looked visibly uncomfortable as they mumbled the words to the national anthem, which was jeered and whistled by teary supporters in the stands.

Another fan Yasi, who spoke to i’s Mark Douglas during the England game, also appeared to have a shirt with Mahsa Amini’s name on it confiscated by a security guard inside the stadium.

Wayne Hennessey: Perhaps a surprise starter given his lack of minutes for Nottingham Forest and Danny Ward’s impressive recent form for Leicester, but has justified Rob Page’s faith so far. In the right place at the right time to foil Azmoun after Gholizadeh’s effort had rebounded the striker’s way via the post but made a far more deliberate stop to tip Saeid Ezatolahi strike wide. Undid his good work by getting sent off – after a VAR check – for a wild karate kick on Taremi after charging manically out of his goal. 6/10

Chris Mepham: Stood firm at the back and was a towering presence in the air winning five aerial duels but his efforts were ultimately in vain as Iran finally made the breakthrough. 7/10

Joe Rodon: Swept up superbly to prevent Azmoun from racing through on goal with a perfectly timed sliding tackle on the edge of his own box and did just enough to put the Bayer Leverkusen forward off after an inviting cross into the six-yard box. Earned the game’s first yellow with a wild lunge on Taremi as the Porto forward skipped by him. 7/10

Ben Davies: Well used to playing as a left-sided centre-back now having done so for the past year for his club but doesn’t have quite the same license to make underlapping surges forward for his country. Shifted across to the left-back after a tactical tweak. 6/10

Connor Roberts: Morphed into Dani Alves momentarily when whipping a superb cross into the box for Moore to attack which should have resulted in the opening goal. Made a heroic block at the other end as Ehsan Hajsafi’s ferocious strike arrowed towards goal. Taken off as Page shuffled his pack but played well. 6/10

Ethan Ampadu: Hassled and harried by the Iranian press who clearly identified the Chelsea-owned Spezia loanee as the player that can make Wales tick. Lost the ball carelessly to initiate a counter-attack but then recovered superbly to deflect a shot wide after busting a gut to atone for his mistake. 6/10

Harry Wilson: Caused Iran one or two problems with his forward runs from midfield in the first-half, earning Wales’ first corner after having a shot deflected from an untracked burst into the box. Faded after the restart and replaced by Dan James as Page tweaked his tactics. 6/10

Aaron Ramsey: Toiled badly in the Al Rayyan sun in what was a disappointingly ineffective performance. So often a difference-maker for his country when it matters but unlike at Euro 2016, the decision to go beach blonde hasn’t yet had the desired effect at this World Cup. 4/10

Neco Williams: Found himself on the receiving end of a couple of enthusiastic challenges on the touchline but was able to continue after a meaty collision with Rezaeian. Switched across to his more natural side on the right but wasn’t able to make much of an impression in the final third such was Iran’s dominance. 6/10

Gareth Bale: Overtook teammate Chris Gunter as Wales’ most-capped player of all time with his 100th appearance but as was the case against the USA, struggled to get involved in the game in any meaningful sense. The penalty against the States masked an otherwise average display and like Ramsey, age finally appears to be catching up with Wales’ greatest-ever player. 5/10

Kieffer Moore: Rewarded for a game-changing impact against the USA with a start and almost capped his call-up with a goal after 11 minutes with Hosseini keeping out his volley on the stretch from point-blank range. Worked hard and will always be a threat with his size and physicality but was completely starved of service that early sighter aside. 7/10

Brennan Johnson: Brought on to inject some speed to Wales’ attack and did just that when racing to the byline with his cut-back to Bale well defended. 6/10

Daniel James: Given the same task as Johnson on the opposite flank but was left poleaxed after attempting to sprint down the left, much to the dismay of his teammates and coaches. 5/10

Joe Allen: Brought on for his first match of any description since playing for Swansea against Hull on 17 September in order to bring some stability and calm to the side, but lost the ball crucially with Cheshmi punishing him. 5/10

Danny Ward: Brought on towards the end after Hennessey’s sending off and conceded twice in the final stages. 5/10