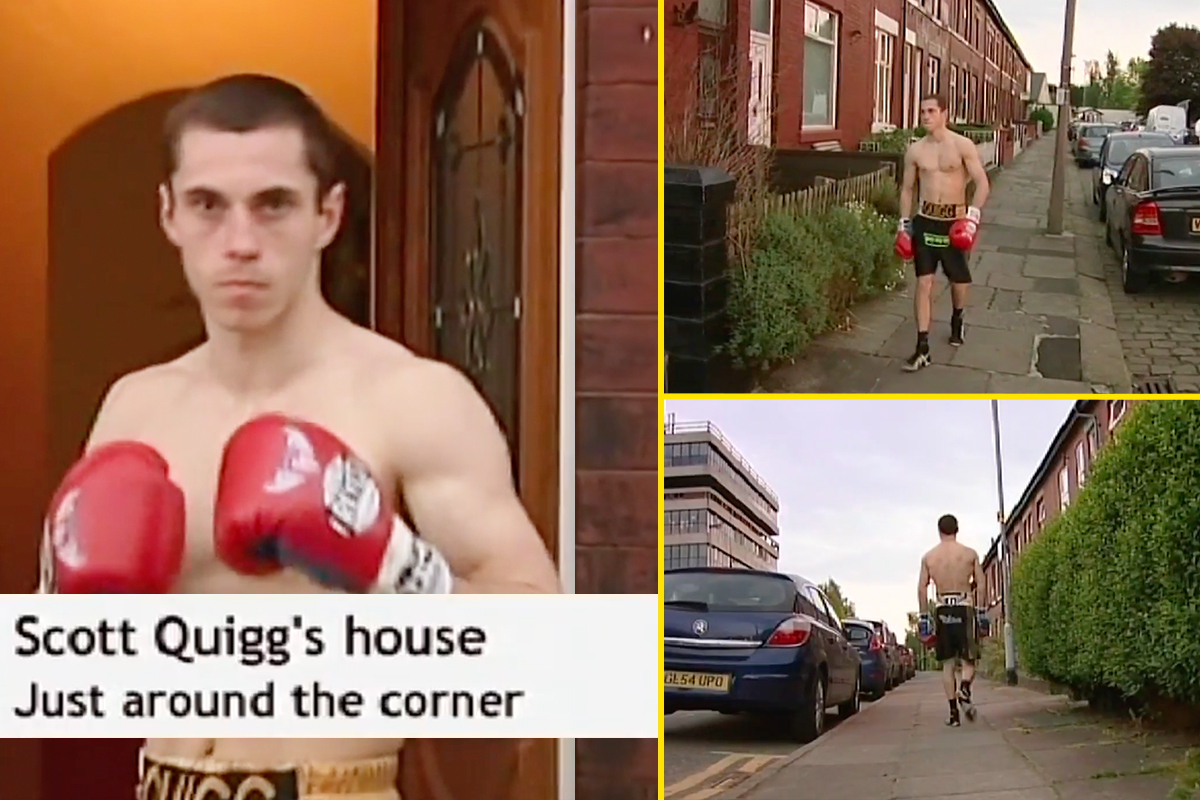 Scott Quigg made the most unintentionally hilarious boxing ring walk ever seen when he strolled from his mum’s house to the Castle Sports Centre in Bury for a fight back in 2010.

Quigg, who ultimately had the last laugh as he went on to become WBA super-bantamweight world champion, was just 21-years-old at the time and 17-0 as a rising pro contender.

The Bury native had never fought in his hometown in his first 17 fights, but finally did so when the town’s council lifted their bizarre ban on boxing specifically to accommodate him.

Remarkably in 1997, Bury Council voted to ban all professional prizefighting.

They did so as a response to Mike Tyson’s ear bite on Evander Holyfield in their infamous heavyweight world title rematch which made headlines around the world.

It took 13 years for the council to finally have a change of heart and permit Quigg to bring boxing back to Bury.

He did so with a fight against Andrey Kostin – a tough Russian who had only been stopped once previously.

However, the most memorable part of the evening was Quigg’s ring walk.

To this day, it is listed on YouTube as the ‘world’s worst entrance’ and is fondly remembered by many boxing aficionados.

As Quigg was introduced by the MC, fans with tickets inside the Castle Sports Centre were directed to turn their attentions to the big screen.

Cameras set up outside Quigg’s mother’s house – where he still lived at the time – captured him emerging from the front door.

He then raised his fists to the camera and began his walk down the road towards the venue while Eminem’s ‘Not Afraid’ blared out.

Quigg was shirtless, wearing his fight shorts, gloves and boots as he marched through the streets of Bury.

He passed several parked cars and wheelie bins, crossing the road as he progressed towards his final destination.

As he approached the leisure centre, a passer-by almost found himself caught up in the moment and scampered to cross the road and get out of Quigg’s way.

Finally, the fighter entered the Castle Sports Centre through the front doors and completed his ring walk as normal from inside.

He received a magnificent reception from his home fans who were all proud to see their hometown hero boxing back in Bury.

He delivered inside the ring too, flooring Kostin with an uppercut inside the opening minute before finishing the fight with the same punch later in round one.

In the end, Quigg’s ring walk lasted longer than his fight.

12 years on, Quigg is now retired and recently reflected on the iconic moment by telling Boxing King Media: “To me it was a good memory.

“When I first did that, everyone was like, ‘Oh that was really good.’ Everybody thought it was mint. But it’s not aged well.

“The amount of stick that I had as time went on. I still get stick today about it.

“It still pops up on social media every now and then.

“But honestly, when I first did that, everyone was proper behind it.

“But listen, memories like that, I wouldn’t change anything. I’ll still be getting stick for that in ten years’ time.”