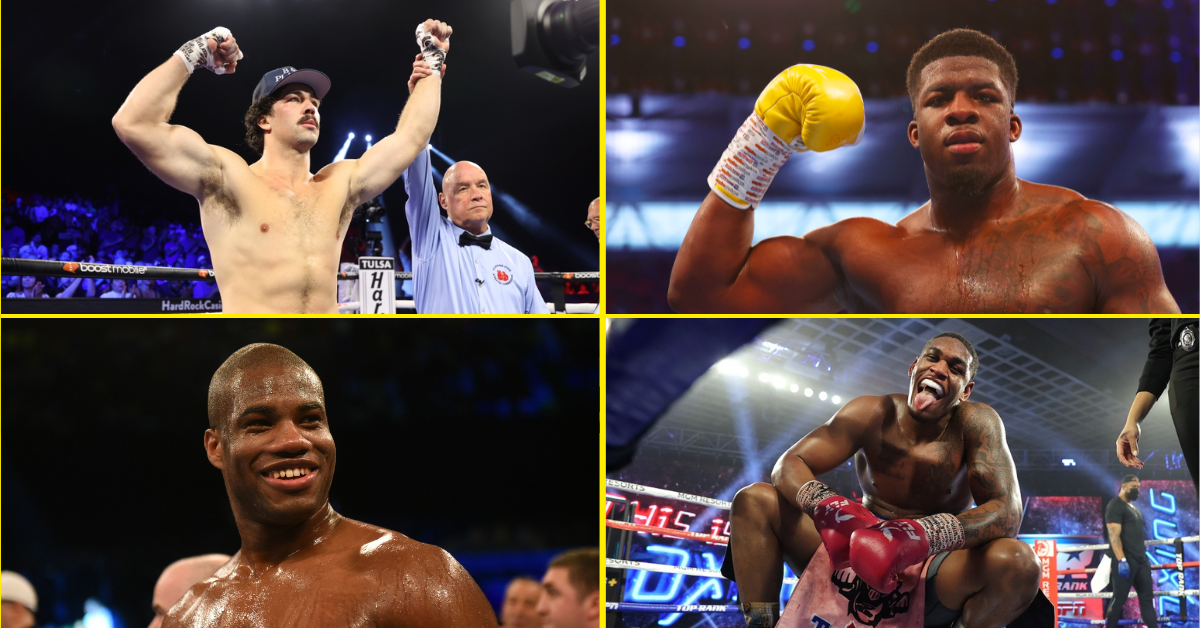 The heavyweight division is buzzing with talent at the top end but, as we know, nothing lasts forever.

Tyson Fury, Deontay Wilder, Anthony Joshua and latterly Oleksandr Usyk rule the roost in boxing’s glamour division and they have provided the sport’s fans with some unforgettable fights.

All good things must end, however, and when you consider Joshua is the youngest of those heavyweights at 33 years old, it becomes clear that the time will soon come to usher in a new age of talent in boxing’s glamour division.

Here, talkSPORT looks at who could be the next generation of heavyweights to take over at the pinnacle of boxing.

Arguably the most exciting of the bunch, ‘Big Baby’ Anderson has already begun his career brightly, with a perfect record of 12 fights, 12 wins, 12 knockouts as a professional.

Anderson has big ambitions for the future and has previously told talkSPORT he believes he will be ready to fight for a world title shot within the next year.

There have even been comparisons made between Anderson and arguably the greatest heavyweight of all time, Muhammad Ali, but it is a testament to ‘Big Baby’s’ character that he is not interested in being compared to anyone.

“I’m not a fan of it to be honest,” Anderson told talkSPORT. “I want to be me.

“I respect him and I’m happy that people are comparing me to him, but I just want to be me and be the best me I can be.”

Torrez Jr, like Anderson, has got off to a perfect start in the very early stages of his professional career with four fights, four wins, four knockouts.

There have, however, been some concerns about Torrez’s smaller stature among the modern day giants of the heavyweight division, standing at only 6ft 2ins compared to someone like Fury who is 6ft 9ins.

With that being said, Torrez Jr actually believes his size is an advantage, as he told talkSPORT: “I think the smaller you are the harder it is to hit you.

“So, I think that might be beneficial to me. I understand that they are big guys, but bigger sometimes that means lumbering as well.

“You get these guys who have one really good shot, but after that the round might be over for them.

“I’m a guy who has an engine on me and I’ll show everybody that small heavyweights are here to stay.”

Dubois burst onto the scene in 2017, scoring knockouts in his first eight fights and in 2020 when he came up against Joe Joyce he was unbeaten with a record of 15-0.

Then he suffered his first and only career setback to date, as he was out-boxed by the more experienced Joyce and he was stopped in the tenth round.

In the aftermath, Dubois received a huge amount of criticism with a number of pundits and fellow fighters claiming he ‘quit’.

This was a make or break moment for Dubois, but since the loss, the young Brit has looked as potent as ever, knocking out his next three opponents and claiming the WBA ‘regular’ title.

Fisher may not be as highly touted as some of the other names on this list, but he is exciting to watch and he creates an electric atmosphere on fight night due to his huge and loud fanbase.

This has drawn praise from Fisher’s promoter, Eddie Hearn, who has made a lofty claim about the heavyweight prospect.

“This isn’t a ticket seller. This is a prospect who I believe can go on and win titles in the division,” the Matchroom boss said.

“He just so happens to be the biggest ticket seller this country has ever seen, since Ricky Hatton.”

‘The Romford Bull’ is 7-0 so far with six knockouts to his name and despite his lack of bouts he has been able to gain experience outside of actual fights by sparring with the likes of WBC heavyweight world champion, Fury, which could spur him on to exceed expectations in the future.

Clarke may be considerably older than the other names on this list, but like his former Team GB teammate, Joe Joyce, he has built up considerable experience in the amateurs which should allow him to fast track his way through the professional ranks.

The Brit recently completed his Olympic dream by winning a bronze medal in the super heavyweight division at Tokyo 2020 and now he has gone 4-0 as a professional so far, with three knockouts.

Prior to his most recent win over Kamil Sokołowski, Clarke spoke to Sportsmail about his career progress so far, saying, “I am unbeaten so that is all I can ask for.

“My development is coming quite nicely in the gym. Unfortunately I don’t think I have had the right opponents to showcase that so far in the pro ranks.

“However, opponents are stepping up and I am definitely improving. So, I will judge it again after this fight but at the minute I am unhappy as I am unbeaten. I am healthy and I am improving so that is all I can ask for really.”

Adeleye is one of the most dynamic heavyweights out there at the moment, which has helped him build a record of 10-0 with nine knockouts so far.

But don’t take it from us, take it from the number one heavyweight in the world right now, Fury, who had this to say about Adeleye when he appeared on BT Sport Boxing’s Chatterbox: “David Adeleye is the future of this division.

“I told him the other night in the changing rooms, ‘You’ve got believe in yourself, Dave, because you’re going to take over the division.’”

This comes after Adeleye proved his talent in a number of sparring sessions with ‘The Gypsy King’, as Fury revealed: “He’s great sparring. Very, very good sparring.

“If he was no good to me, then I wouldn’t bring him into my training camps, but he gives excellent work, so I keep bringing him in, ever since the second Wilder fight.

“He keeps learning, keeps listening and he can be the next Lancaster Bomber for sure.”