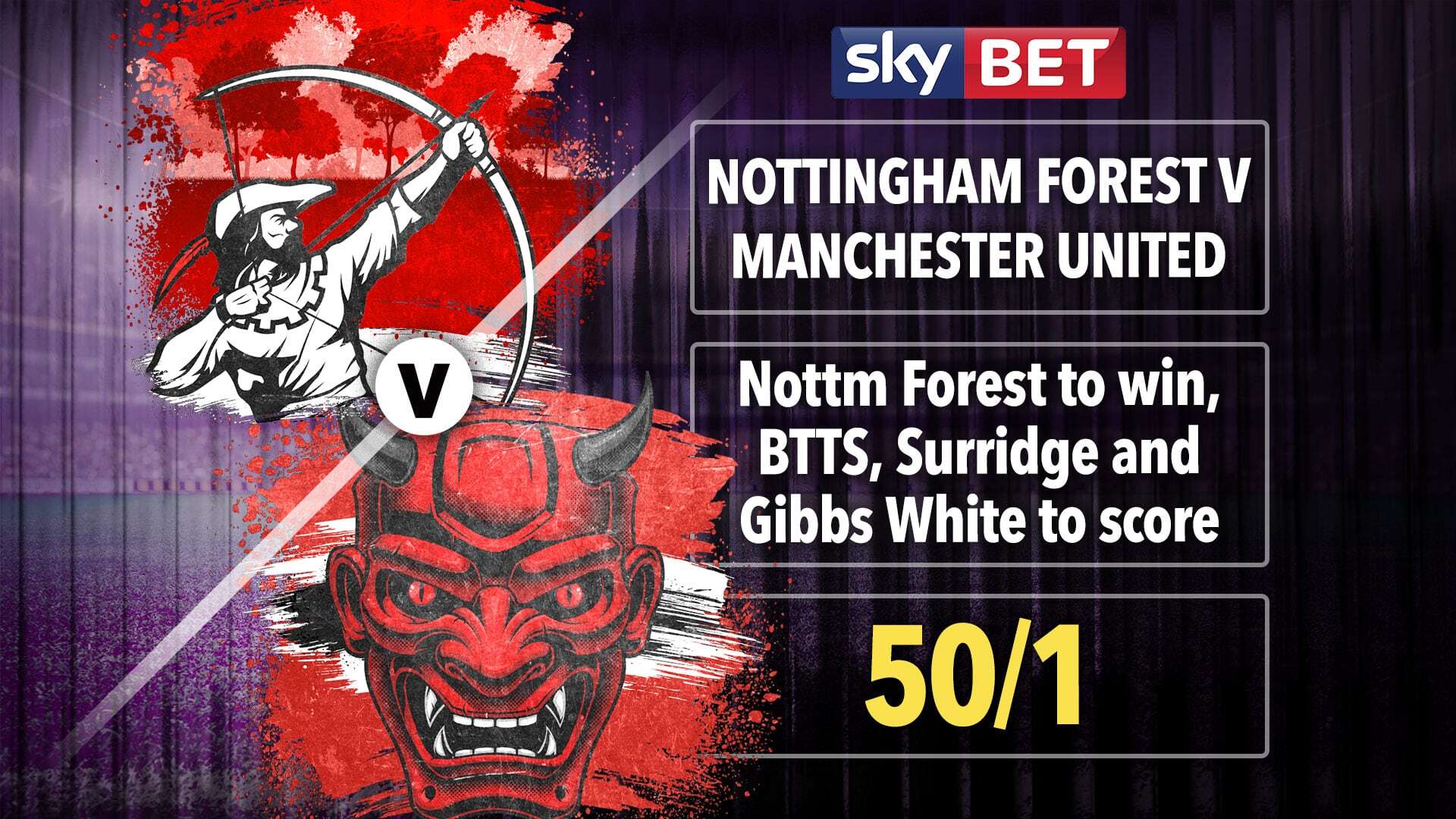 Nottingham Forest host Manchester United later tonight at the City Ground in the first leg of their Carabao Cup semi final, looking to take a lead with them to Old Trafford next week.

And Sky Bet have big 50/1 odds on Forest to win their home leg, both teams to score and Sam Surridge and Morgan Gibbs-White to find the back of the net, which can be added straight to your bet slip here.

Nottingham Forest’s first season back in the Premier League since 1999 has also brought about a domestic cup semi-final place, in which the Midlands side will take a strong run of form as they prepare for the challenge of Manchester United.

Steve Cooper’s side struggled throughout the opening half of the season, but have lost just one league game since the end of October, ironically coming against their opponents on Wednesday.

Forest, who were rock bottom of the table in November have now climbed up to 13th, and will fancy their chances against a United side whose long winning run has been ended and are now without a win in their last two matches.

Striker Sam Surridge has already scored twice in their run to the semi finals of the Carabao Cup, and bagged a late equaliser in their draw in the league with Bournemouth on Saturday.

Club record signing Morgan Gibbs-White has arguably been Forest’s best player in recent weeks, with the attacking midfielder bagging two assists in the recent derby win over Leicester, and scored in the shootout of the last round against his old clubs Wolves to send Forest into the last four.

Erik ten Hag’s side, just over a week ago were high off a win in the Manchester derby and were just a point behind rivals Man City and had declared themselves to be in the title race.

A draw against Crystal Palace and defeat to league leaders Arsenal since then has seen the gap between themselves and City open up to six points, and the gap to Arsenal is now 11 points, with the Gunners also having a game in hand.

The two sides have won nine Carabao Cup titles between them, with United leading 5-4.

The Red Devils last lifted the trophy in 2017 while Forest fans have had to wait since 1990 for the last time they won it.

Betting Offer Of The Day


Nottm Forest v Man Utd: Rashford to have 2+ shots on target at 2/1 with Sky Bet


Man City v Arsenal: Get up to £25 in free bets with talkSPORT BET

Commercial content notice: Taking one of the bookmaker offers featured in this article may result in a payment to talkSPORT. 18+. T&Cs apply. Begambleaware.org

A responsible gambler is someone who:

For help with a gambling problem, call the National Gambling Helpline on 0808 8020 133 or go to www.gamstop.co.uk to be excluded from all UK-regulated gambling websites.