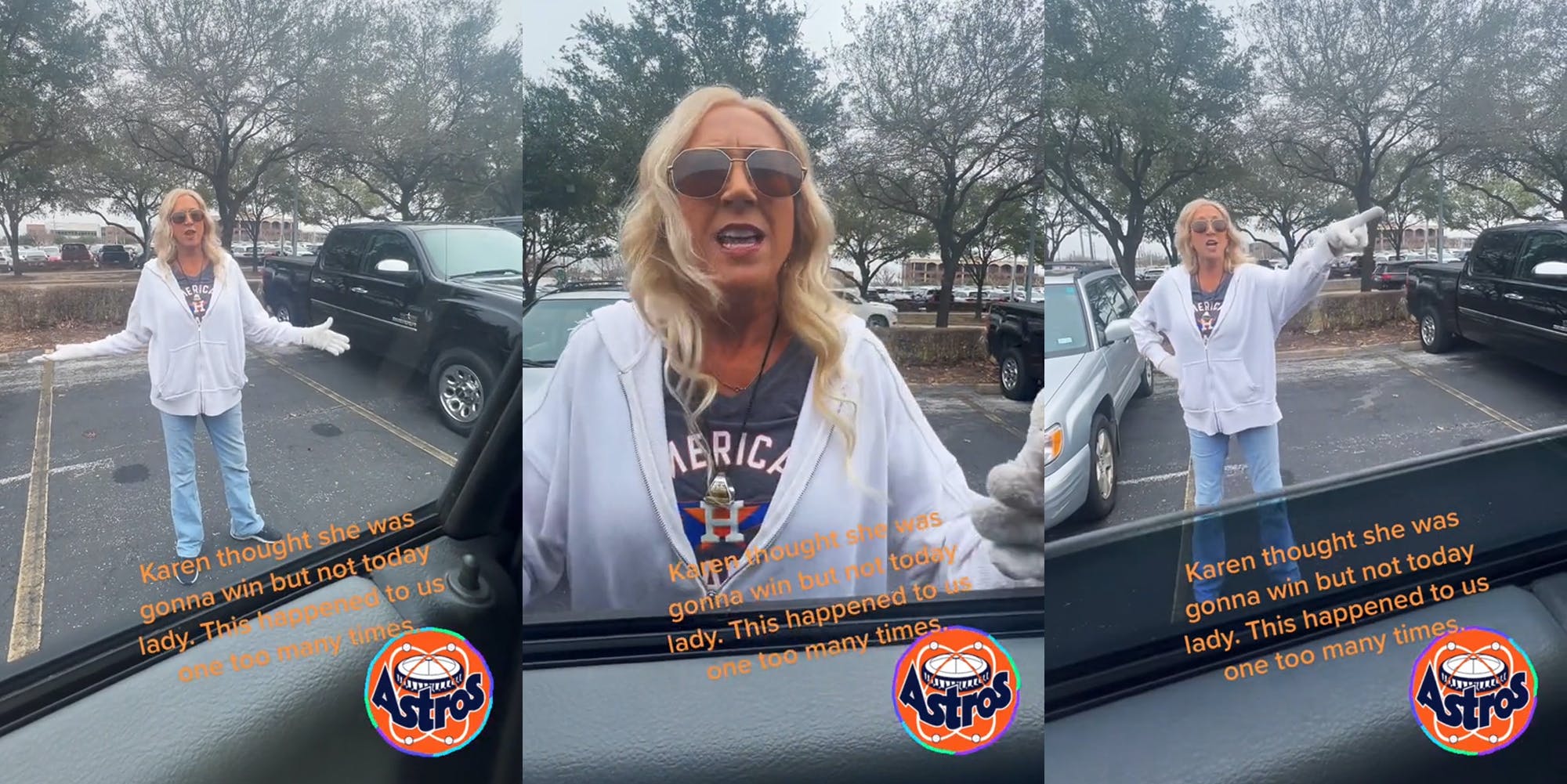 A Houston Astros fan went viral on TikTok for recording a “Karen” standing in a parking space to keep them from parking in it.

The Astros fan, named Courtney (@courtneymh9765), posted a nearly four-minute-long video of her and her partner’s interaction with the Karen. Based on when the video was posted, the incident appears to have occurred during Astros FanFest on Jan. 21. As of Jan. 25, the video received 3.7 million views.

“Karen thought she was gonna win but not today lady. This happened to us one too many times,” Courtney wrote in the video’s on-screen text.

In the video, the Karen was standing in an empty parking space as Courtney’s vehicle idled in front of the spot. The woman was on the phone and appeared to be waiting for someone, presumably to save the parking space for them. Seemingly exasperated, she waved her hands in the air and shouted unintelligibly at someone off-camera.

Finally, she approached Courtney’s vehicle, and Courtney’s husband in the front passenger seat rolled down the window.

“Why are you trying to ruin this day for people?” the Karen said. She explained that she jumped out of her car to save the parking space when she passed it. Then she asked, “Are you high? You’re obviously high.”

She waved her arms dramatically while insisting that Courtney’s husband was ruining the day by “holding everybody up.”

“You are not real Astros fans if you’re acting like this, and that’s the truth,” she said.

Meanwhile, other drivers honked their horns as the standoff presumably halted movement in the parking lot.

“Let’s go! Get this fucking crazy lady out of here, somebody,” Courtney’s husband said.

The Karen refused to move, and Courtney’s husband rolled his window back up. Someone off-camera tried to convince the woman to move, but she continued to stand around and point at Courtney’s car as if to show who the real culprit was.

“Dude, that’s not how it works, dude,” Courtney’s husband said. “Come on. You’ve got to drive around and find a spot. If that was the case, everybody would be doing that, and this would be a shit show. Come on, how old are you?”

The two continued their standoff, and the man snapped at the Karen to find a spot before she missed the show. The Karen finally walked away but not before she marched up to Courtney’s car to snap in her husband’s face.

“You’re pathetic Astro fans, and you both should be ashamed of yourselves because there’s kids. This is karma,” she said.

The video garnered thousands of comments from incredulous viewers, several of whom said the Karen drew a striking resemblance to both U.S. Rep Marjorie Taylor Greene and Mickey Mouse.

“OMG is that Marjorie Tyler Green,” one viewer commented.

“I’m too distracted by the Mickey Mouse gloves,” another wrote, referencing the long white gloves the woman wore and repeatedly fiddled with throughout the incident.

Other users said they couldn’t believe the woman’s audacity for thinking she was entitled to a parking spot by standing in it.

“Love how she’s acting flabbergasted by YOU,” one user commented.

“I honestly can’t even imagine standing in a parking space and trying to save it for someone,” a second wrote.

Some said Courtney should have just pulled into the parking space and forced the Karen to move.

“Just slowly pull in, they always move,” one viewer proposed.

“If they dont move my dad just continues to park anyways,” another shared.

The Daily Dot reached out to @courtneymh9765 via TikTok comment.