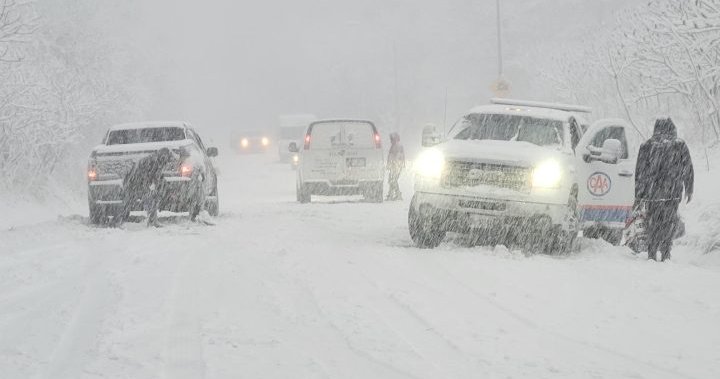 Police are responding to about 40 collisions across the Greater Toronto Area as a strong winter storm hits the region on Wednesday, making for a messy evening commute.

In a video posted to Twitter at around 4:45 p.m., Ontario Provincial Police Sgt. Kerry Schmidt said the snow is coming down, making for slippery, icy and slick road conditions.

“The salters and plows are out there trying to keep up, but the snow continues to fall,” he said.

He said motorists out on the roads should “drive with extreme care and caution.”

“Drive to those conditions, make sure your headlights are on and give yourself lots of distance behind traffic in front of you,” he said.

Schmidt said those who don’t need to go out tonight should stay at home and “wait for the system to pass.”

“Let those plows and salters clear the roads before we head out again,” he said “Please be careful out there and drive safe.”

Environment Canada has issued a snowfall warning for Toronto, saying total accumulations between 15 and 20 cm is possible.

The agency said the city will receive “significant snowfall” which will cause reduced visibility, making travel difficult.

The agency said the storm is expected to end Thursday morning.

The snowstorm was making things difficult for those trying to take public transit in Toronto as well.

The Toronto Transit Commission (TTC) said buses had begun to detour due to weather on Wednesday afternoon.

As of 1:15 p.m., the TTC said 41 bus stops had been taken out of service due to weather conditions.

During severe storms, Line 3 (Scarborough RT) can also be taken out of service and replaced with shuttle buses. On its website, the TTC said it would shutter the line at 6:30 p.m. on Wednesday “until further notice.”

Not an easy commute — vehicles not making up this hill on Duncan Mill Rd. at Don Mills.#onstorm pic.twitter.com/oE3MKv4c7W