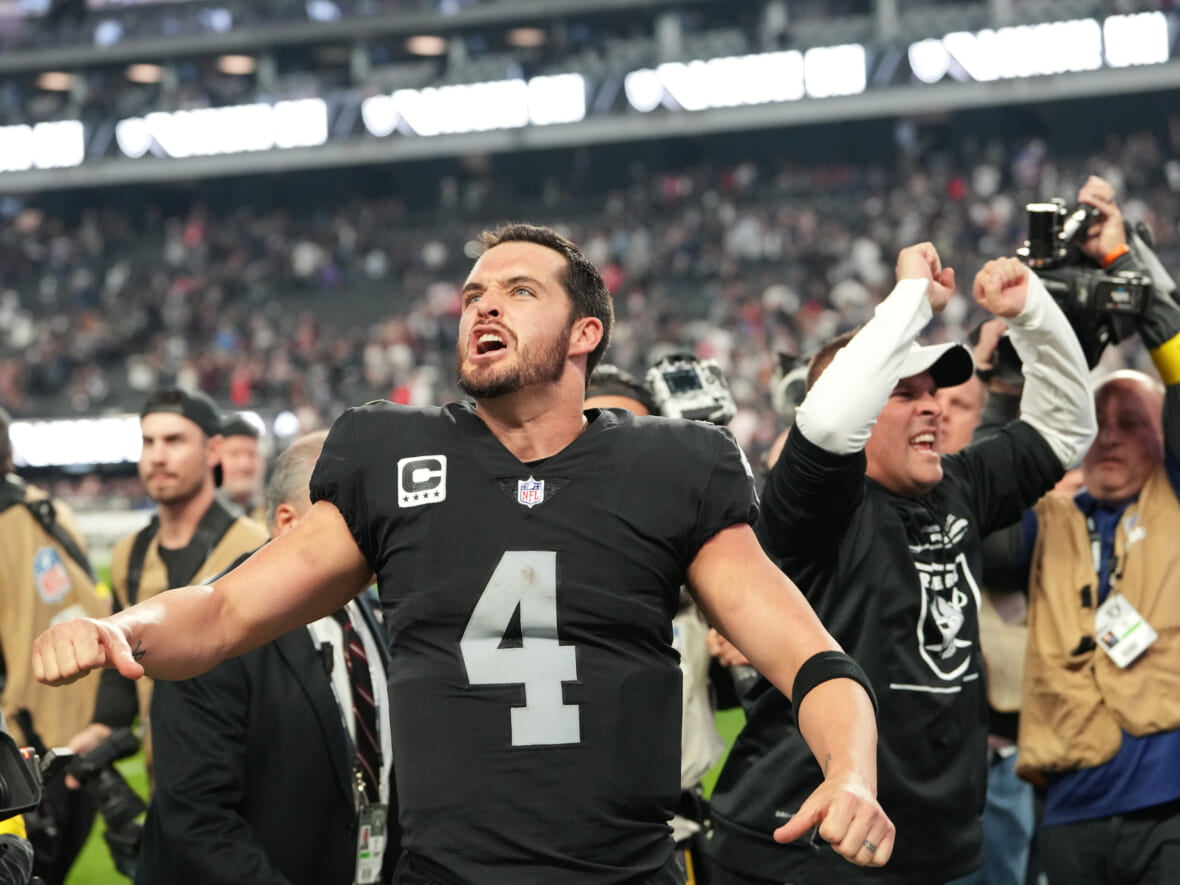 Derek Carr has declined to speak the “whole truth” about his breakup with the Las Vegas Raiders. Based on his most-recent tweet, he’s ready to move on. Meanwhile, general manager Dave Ziegler is working the phones to find a trade partner. What could he get in return for Carr assuming the 31-year-old signal-caller waives his no-trade clause?

ESPN’s Adam Schefter expects the Raiders to trade Carr “sooner than later” and said that several teams have an interest in acquiring him. Though, the NFL insider didn’t mention the fact that the quarterback can play hardball and refuse to waive his no-trade clause. Perhaps, Schefter has some intel Carr will stamp his approval for a team that’s on his preferred destination list.

Whatever the case, Ziegler has until February 15 to part ways with Carr before his 2023 base salary ($32.9 million) and $7.5 million of his 2024 salary lock in for a total of $40.4 million guarantees. The Raiders can use previous trades that involved comparable quarterbacks to get an idea of what they can receive in exchange for Carr.

So, let’s examine two transactions from the previous offseason.

Wentz only played 42.9 % of the offensive snaps. So, the Colts came away with a second-rounder and a couple of third-rounders.

While Wentz’s tenure in Indianapolis ended with consecutive losses that kept the Colts out of the playoffs, he posted decent passing numbers with 3,563 yards, 27 touchdowns and seven interceptions with a 62.4% completion rate for the 2021 season. So, while three Day 2 picks seem rich for him, Washington likely saw his passing numbers as a reason for optimism.

Not too long after the Colts traded Wentz, they acquired Matt Ryan from the Atlanta Falcons.

Before that transaction, Ryan’s volume passing numbers looked similar to Carr’s 2022 production. The former threw for 3,968 yards, 20 touchdowns and 12 interceptions with a 67% completion rate in 2021 with the Falcons. Yet the quarterback-needy Colts sent over their third-rounder for a then-36-year-old signal-caller on the decline.

In comparison, Carr threw for 3,522 yards, 24 touchdowns and 14 interceptions with a 60.8% completion rate. Head coach Josh McDaniels’ decision to bench Carr shouldn’t hurt his trade value because teams understand the risk the Las Vegas Raiders would’ve taken if he suffered an injury, which would’ve locked in the $40.4 million guarantees.

What hurts Carr’s trade value is his cap number, which rises from $34.9 million (ninth-highest cap hit among quarterbacks in 2023) to $43.9 million (sixth-highest cap hit among quarterbacks in 2024). Of course, extensions for Joe Burrow, Justin Herbert, Jalen Hurts and eventually Trevor Lawrence could impact those cap rankings. However, a team acquiring Carr will be paying him on the scale of top-12 QB money.

While Carr’s 2023 cap hit seems manageable, a team may want some flexibility for 2024 in case he falls short of expectations next season.

On the flip side, Carr isn’t likely to get a deal as good as his current contract on the free-agent market after a down year. If he exceeds expectations with a new team, that club may not mind his $43.9 million 2024 cap hit after a 2023 playoff run.

Nonetheless, a team that’s willing to absorb Carr’s contract may push back on sending multiple premium picks in addition to inheriting his deal.

The Colts received second- and third-rounders for Wentz, but they had to package him with second- and seventh-round selections to sweeten the deal. Still, Indianapolis came out the winner in that transaction with two additional Day 2 picks.

In turn, Indianapolis overcompensated for Ryan, who’s clearly in the latter stages of his career.

Based on those two trade deals, Carr should be able to fetch a second-round pick and possibly an additional late-round selection. Though he didn’t post impressive numbers in 2022, he’s still in the prime of his career heading into his age-32 term and just led a depleted roster to the playoffs one year ago.

Furthermore, he’s been an accurate passer, completing at least 67.3% of his throws in four consecutive seasons (2018-21). Lastly, he’s durable and hasn’t missed a game due to injury since the 2017 postseason.

Carr certainly has more value than Ryan, who went to the Colts for a third-rounder. While he’s not quite worth the demand of a first-round pick because of his contract, it only takes one desperate team (that he approves of) to make an aggressive offer.

However, with the idea that the Raiders will release Carr if they cannot come to an agreement on a trade, some teams may prefer to wait to see if he hits the open market. With that said, a team that truly believes it’s a quarterback away from a playoff run may want to skip the line of suitors for him.

Why else would a team trade for Carr if the Raiders will release him before February 15? Well, because several teams need a quarterback and few quality signal-callers will hit the open market. After Tom Brady and Carr, Jimmy Garoppolo, Baker Mayfield and Sam Darnold are potential alternative options. The New York Giants see Daniel Jones as a part of their future, the Baltimore Ravens will open negotiations with Lamar Jackson and the Seattle Seahawks want to retain Geno Smith.

If a team wants Carr, they can secure him in a trade rather than compete with several other clubs in courting him on the open market.

Regardless of how you feel about Carr, don’t underestimate the quarterback market. A decent signal-caller can save the jobs of a general manager and head coach while elevating a solid roster into playoff mode.