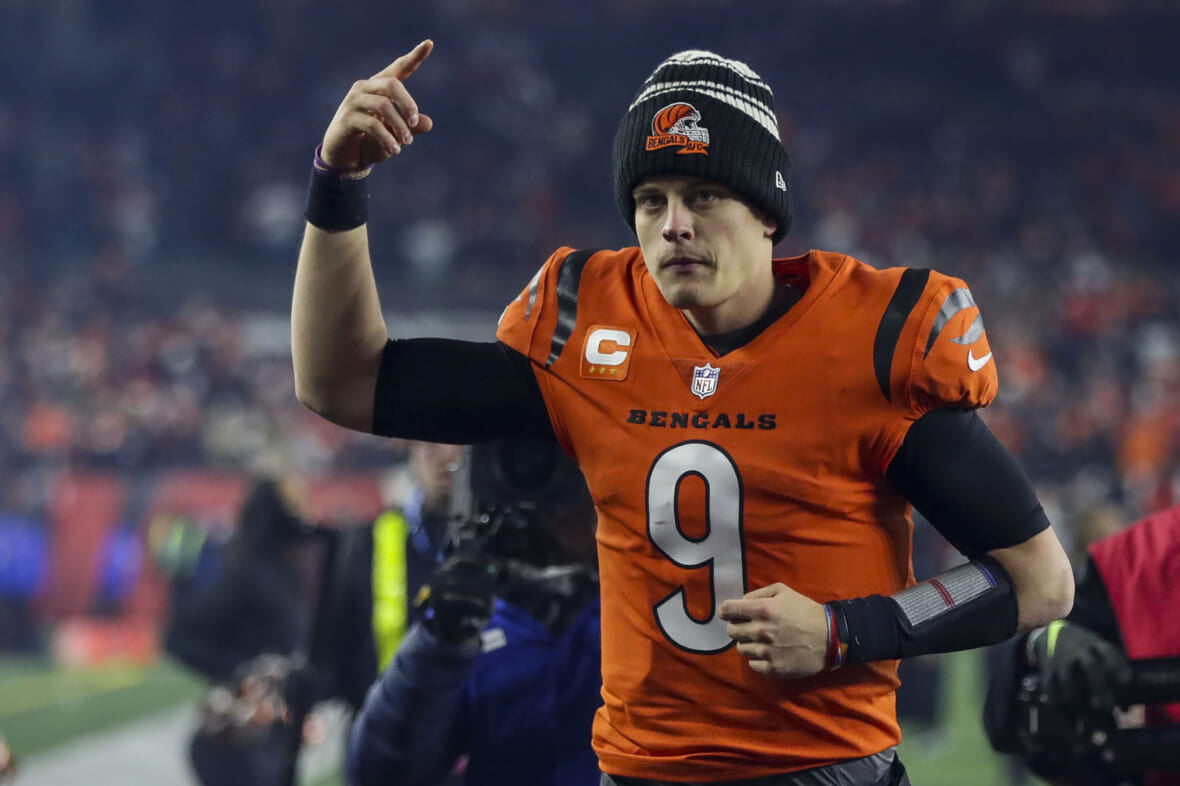 One of the top individual matchups in recent NFL Playoff history will take place Sunday evening. Joe Burrow leads his Cincinnati Bengals against Patrick Mahomes and the Kansas City Chiefs in the AFC Championship Game.

This is a rematch of last season’s conference title game in which Burrow led his Bengals to an upset road win over Mahomes and the Chiefs. A win here and the former No. 1 pick from LSU will have Cincinnati playing in back-to-back Super Bowls for the first time in franchise history.

The backdrop here for Kansas City is the high-ankle sprain Mahomes suffered in last week’s win over the Jacksonville Jaguars. While head coach Andy Reid has already gone on record indicating the likely NFL MVP will be on the field, there’s no reason to believe he’ll be anywhere near 100%.

With a matchup against either the San Francisco 49ers or Philadelphia Eagles in the Super Bowl on the line, quarterbaack play will take center stage inside Arrowhead come NFL Championship Sunday. Below, we look at a few reasons why Burrow has the advantage of Mahomes.

There’s a lot of layers to the injury Mahomes suffered in last week’s win over Jacksonville. The dreaded high-ankle sprain was reported almost immediately after he went into the locker room to get checked out. Generally, sprains of this ilk sideline players for multiple weeks. Mahomes was able to come back in after halftime and lead his team to a win. However, he was nowhere near 100%.

Following the game, Chiefs head coach Andy Reid indicated that he didn’t believe the high-ankle sprain Mahomes suffered was as bad as previous version from back in 2019. Mahomes had a high-ankle sprain in Week 1 against Jacksonville, returning to throw four touchdowns the following week.

That’s all fine and dandy. But a lack of mobility will certainly have an impact on Mahomes come Sunday evening against Cincinnati. He relies a lot on his mobility to get outside of the pocket and make plays. Taking on a Bengals pass-rush duo in that of Trey Hendrickson and Sam Hubbard who had a combined 46 QB hits will magnify this further.

We’re interested to see how much Patrick Mahomes practices during the week. This could play a role in determining just how limited he’s going to be. The forecast for Sunday evening in Kansas City calls for 10 degree weather. That will obviously impact Mahomes’ ankle, too.

Joe Burrow’s history of success against the Kansas City Chiefs

In two regular-season games against Kansas City to open his career, Burrow has completed 79% of his passes for 732 yards with six touchdowns and zero interceptions for a ridiculous 138.8 QB rating. He’s 2-0 in those starts.

This doesn’t even take into account what we saw from the former No. 1 pick in last year’s AFC Championship Game. He led the Bengals back from a 21-3 first-half deficit with touchdown passes to Samaje Perine and Ja’Marr Chase to give Cincinnati the conference title via a 27-24 overtime win.

It’s crazy to think about. Playoffs included, the Chiefs are 29-9 since the start of the 2021 NFL season. Three of those nine losses have come against Burrow-led Bengals teams.

As for what the legendary Patrick Mahomes has done in these three games against Cincinnati, the likely league MVP has accounted for six touchdowns compared to two interceptions. It’s more about Kansas City’s defense not being up to the task. That should continue in the AFC Championship Game Sunday evening.

Even without Tyreek Hill in the mix after his shocking trade to the Miami Dolphins last offseason, Kansas City remains loaded on offense. Travis Kelce is among the best pass-catching tight end in NFL history and is coming off a record-setting performance in the AFC Divisional Playoffs.

First-year Chiefs wide receivers JuJu Smith-Schuster (78 receptions, 933 yards) and Marquez Valdes-Scantling (42 receptions, 687 yards) also produced during the regular season. Even then, this doesn’t compare to what Joe Burrow has on offense in Cincinnati.

We already know about Joe Burrow’s connection with Chase, but his splits passing the ball to Higgins and Boyd during the regular season were equally impressive. The quarterback boasted a 115.6 passer rating when targeting Higgins and a 94.7 mark when throwing to Boyd.

This is problematic for an inexperienced Chiefs cornerback group. Kansas City yielded north of 4,100 passing yards to go with 33 touchdowns and 11 interceptions. Rookie Jaylen Watson (103.9 QB rating allowed) and veteran L’Jarius Sneed (66.3% completion allowed) were picked on at times. As for Cincinnati’s defense, it gave up just 17 passing touchdowns against 13 interceptions during the regular season.