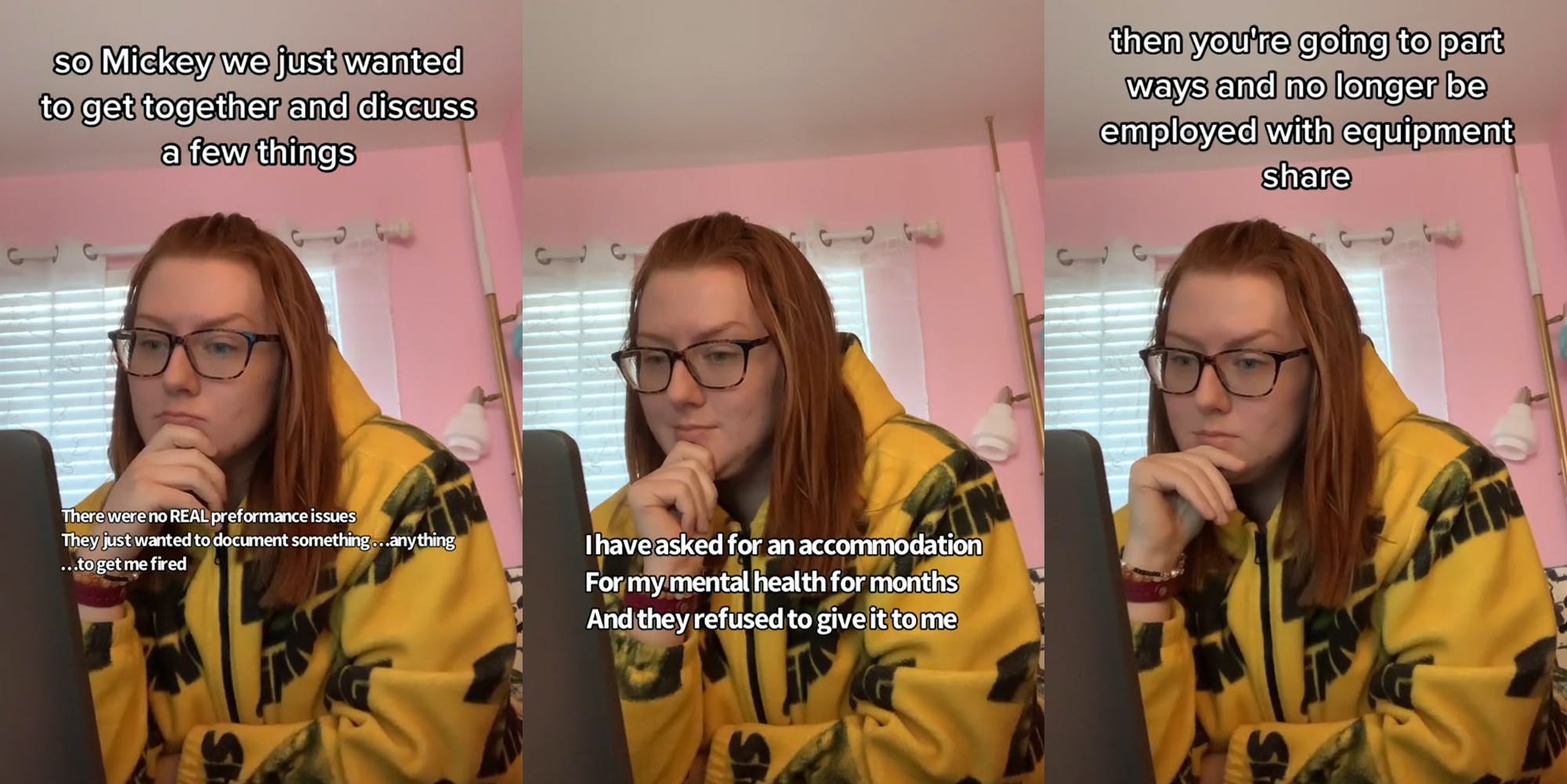 A worker went to TikTok to chronicle getting fired over Zoom, claiming that she didn’t receive the mental health accommodations she needed in the run-up to her dismissal.

The video comes from TikTok creator Micki Cullifer, @dietcokeginger. Since being shared on the platform on Tuesday afternoon, the video has attracted more than 2.5 million views in less than 24 hours.

In the clip, Cullifer gets onto a Zoom which includes a supervisor and an HR representative with a company she identifies as EquipmentShare.

There is a nationwide company with this name, based in Columbia, Missouri. According to its website, the company’s mission is “to enable the construction industry with tools that unlock substantial increases to productivity. Together with our team and customers, we are building the future of construction.”

The creator started the video by announcing, “Oh yeah, I’m totally getting fired” to the camera, before settling into the Zoom call. After a round of greetings, the EquipmentShare representative got to the reason for the call—to “get together and discuss a few things and as a follow up from last week where we discussed some performance issues last Tuesday.”

The employer noted, “We have reviewed several phone calls and emails from the end of last week,” described as “very alarming” and not in line with “values of providing great customer service that we strive for within our department.”

@dietcokeginger Replying to @jeninminn watch me get fired over zoom. This company is toxic. They refused to work with my mental health Accommodations So they decided my work was now not good enough which was a total lie #c#corporatelifeg#gettingfiredt#toxicworkplacet#toxicm#mentalhealthe#employmentlaww#workaccommadationsc#corporategirl ♬ original sound – dietcokeginger

As the call continued, the creator provided on-screen captions reacting to what was being said, questioning the term “alarming” and labeling the allegations about bad customer service as “completely untrue.” Cullifer also noted that she made an effort to do well, reading signs that the company might be firing her.

Additionally, she detailed via an on-screen caption that her mental health accommodation needs have gone unmet.

“I have asked for an accommodation for my mental health for months and they refused to give it to me,” she wrote.

The firing then comes, with EquipmentShare arranging to box up her belongings for a Friday pickup, requesting that she return company equipment at that time. Due to snow affecting the region, the company reps wanted to wait until Friday for the swap, noting when she arrived at the office, to just “use one of those handicapped parking spots” in front of the building to accommodate the exchange.

After the creator gets off Zoom, she starts typing, noting in an on-screen caption that she’s writing to a work friend via Slack before her employer turns off access to that platform.

In the caption accompanying the TikTok, the creator wrote, “This company is toxic. They refused to work with my mental health accommodations. So they decided my work was now not good enough, which was a total lie.”

In a follow-up video, answering commenters’ questions, Cullifer explained that the accommodation she asked for, due to what she described as anxiety and depression-related panic attacks, was to work from home on days that the panic attacks were particularly bad.

She noted that her employers referred to those panic attacks as “flare-ups.”

“It’s not eczema,” the creator cracked. “It’s a disability.”

Commenters to the original video had advice for the creator, including one who claimed, “If you requested an accommodation and they did not go through the interactive process w/ you, you can sue.”

Another offered, “File a claim with ADA. That’s a Federal Agency.” A further user suggested, “File a complaint with EEOC for not complying with any accommodations requested,” adding, “That’s what I did.”

Others just wished the creator well and offered platitudes along the lines of “good riddance,” with one noting, “just take it as the universe shoving you in a better direction.”

The Daily Dot has reached out to both Cullifer and EquipmentShare for comment.

Phil West is a veteran professional writer and editor, and the author of two books on soccer, ‘The United States of Soccer,’ and ‘I Believe That We Will Win,’ both from The Overlook Press. His work has appeared most recently in The Striker, where he serves as managing editor, MLSSoccer.com, Next City, and Texas Highways. Based in Austin, he is also a lecturer in the Writing Program at the University of Texas at San Antonio.